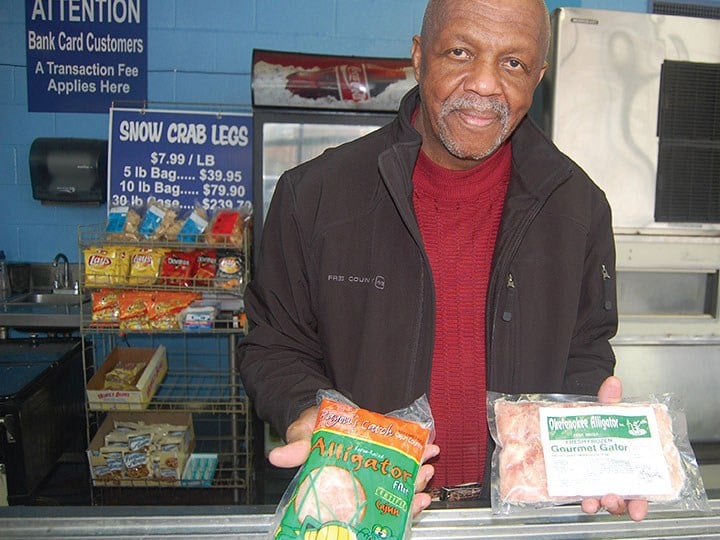 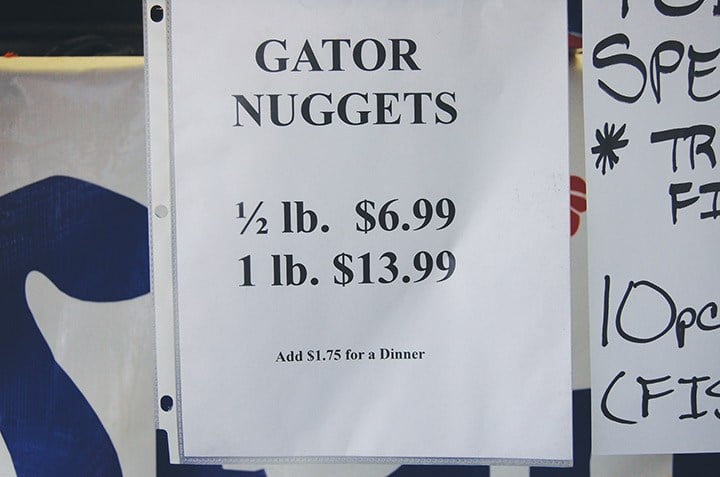 Precooked gator is usually sold as fried nuggets paired with French fries or fried fish. To most people, the taste of gator meat is somewhere between chicken and pork. Photo by Travis Broussard

Alligator meat has become a popular seafood in South Carolina, with South Carolinians snapping up the chewy, pork-like meat almost as fast as stores can put it in their freezers.

Gator meat, which comes almost exclusively from the tail, is typically a by-product of processing. Gators as a product are wanted more for their leathery hide, usually to make clothing and shoes, according to Mark Kelly, a sales representative at Inland Seafood, a distributor in Atlanta, Ga., and the largest distributor in the Southeast.

Lucius Moultrie, owner of Palmetto Seafood Company in Columbia, said he started selling gator around 2009 in one- and five-pound packages. In the week before the University of South Carolina Gamecocks played the University of Florida Gators that year, Moultrie advertised the meat with the slogan "eat gators, beat Gators," and his family business had to scramble to keep up with demand. Moultrie said some of his customers have made it a tradition to eat gator meat before and during USC/UF games.

David Young, owner of Roastfish & Cornbread in Hilton Head, said the restaurant typically sells 20 to 25 pounds of gator a week during the summer. He said few places in Hilton Head sell gator meat, but the food is popular among tourists, especially with kids.

According to Young, gator is prepared in a variety of ways, but it is typically served as deep-fried nuggets. Young said his restaurant also sells the meat in a smoked pork/gator sausage and as ribs. He also has a recipe for shrimp and gator chili.

Mike Godbout, general manager of Sellsfish Premium Seafood in Summerville, said he started selling gator in 2011 and has seen sales gradually rise. On a good week, he said, he sells about 30 pounds. Godbout said that he also sees a significant rise in sales around Gamecocks/Gators games.

Why has gator meat become so popular? Moultrie, Young and Godbout cited credited the recent rise in popularity to History Channel's Swamp People, which documents the life of a gator-hunting family in Pierre Part, La.

Paula Huff, who co-owns Huff's Seafood on James Island alongside her husband, Bill, had trouble acquiring and selling the meat during last year's recession because gator farms in states like Georgia and Louisiana stopped harvesting the animals until the economy improved.

Good news for the Huffs and other seafood markets arrived when Sen. C. Bradley Hutto, D-Orangeburg, proposed R167/S714, the Captive Alligator Propagation Act, in May 2013.

The act was signed into law by Gov. Nikki Haley April 14, making regulated gator farming, the process of carefully raising gators specifically for slaughter and processing, legal in South Carolina.

The Huffs have been selling gator for a decade. Gator, Paula Huff said, can be cooked just like almost any other meat. She said a number of her customers come from outside the Charleston area to buy gator from her.

Gator meat sells for about $12 to $14 per pound. According to Moultrie, that's roughly double from when he first sold it. Despite the high price, he said, the meat is not always available because of its high demand.

David Szam, a sales representative at Lowcountry Shellfish, a distributor in Charleston, said the product is especially popular at gullah restaurants across the state.

Most of Lowcountry Shellfish's meat comes from a gator farm in Crescent City, La., and the distributor provides for about 35 locally owned restaurants and fish markets and dozens of chains and franchises. He considers Roastfish & Cornbread and Sellsfish to be his biggest buyers.

Szam said that gator as a food is a "love it or hate it thing," but most people try it anyway for the novelty of eating something "exotic."