A’ja Wilson’s life anything but normal as No. 1 basketball recru - DatelineCarolina 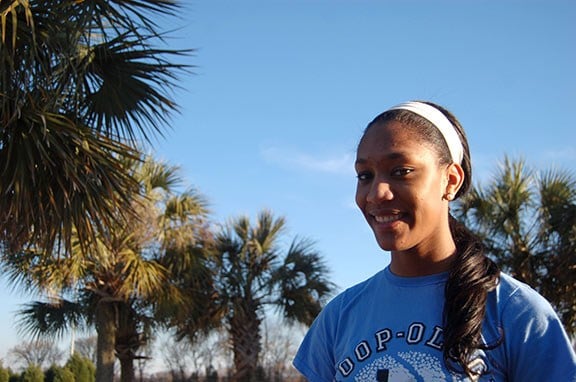 A'ja Wilson learned how to play basketball from her dad, Roscoe Wilson. Photo by Isabelle Khurshudyan.

Roscoe Wilson cheers on his daughter, A'ja Wilson, in the 2014 girls' basketball playoffs. Heathwood Hall went on to win the state championship. By Isabelle Khurshudyan.

When the No. 1 women's basketball recruit in the country goes home, she curls up on the couch and watches "NCIS" with her parents. She sends texts and tweets full of emojis. On weekends, she sleeps in and watches movies with her friends. She loves her pearls.

A'ja Wilson clings to those moments of normalcy more and more as her college decision nears. On April 16, she will choose between South Carolina, Tennessee, Connecticut and North Carolina.

Attention comes with the territory of being the No. 1 recruit in the country, but when it's a No. 1 recruit that hasn't picked a school yet, the process can become overwhelming. While the impending decision brings anxiety, it will also bring relief and the end of a recruitment that's made for an anything-but-normal senior year.

The No. 1 recruit didn't even like basketball at first. But as she jogs from one end of the court to the other after practice at Heathwood Hall Episcopal School, a private school in her hometown of Columbia, her former Amateur Athletic Union coach, Jerome Dickerson, casually notes that she'll change women's basketball.

Dickerson is referring to her versatility. She has the physique of a center, 6 feet, 5 inches with the ability to dunk. She can shoot with accurate consistency from 3-point range. She can handle the ball like a guard. She can drive the lane like a forward.

Aja's father, Roscoe Wilson, played basketball at Benedict College and went on to play professionally in Europe for 10 years. He pushed A'ja to play when she was 10, signing her up for an Amateur Athletic Union team. The Amateur Athletic Union, or AAU, is one of the largest nonprofit volunteer sports organizations. Parents pay for their children to play with their age group, and the teams typically travel.

A'ja hated it, and she enjoyed keeping a spot warm on the bench.

"My dad kind of got in my face and was like, ‘I'm not going to be paying all this money for you to play AAU and ride the bench,'" A'ja said. "That's when I started to go outside and work on my shot."

Roscoe, a consultant and lobbyist for community programs for ex-offenders and primary health care monitoring concepts, had a different training regimen in mind. While some kids went to the pool with their friends during the hot Columbia summers, A'ja practiced her shot with a medicine ball while wearing a weighted vest. The weights in the vest shift with her movements to simulate a defender always guarding her.

"It's what a daddy does," Roscoe said. "You do it out of love because you want your daughter to excel in anything. But then it got to be a goal, and that was the transition."

Her shots started sinking with more consistency, and she started becoming more interested in the sport, watching men's professional games and admiring Clippers forward Blake Griffin. She was on the Heathwood Hall varsity team in eighth grade. She got her first college offer that year from UNC Greensboro. Then she grew from 5 feet, 9 inches in her freshman year to 6 feet, 5 inches in her senior year.

A'ja was a member of the 2013 under-19 USA World Championship basketball team, which had a perfect 9-0 record and won the gold medal in Lithuania.

Though A'ja enjoyed the success, the training often put a strain on her relationship with her dad. She would turn to her mother, Eva Wilson, for balance — the person who would help A'ja feel normal by telling her to do homework and chores, like doing the dishes and taking out the trash.

"We're just trying to make sure she is balanced," Eva said. "She's a regular teenager. She procrastinates. Sometimes she can be lazy. That's what normal 17-year-olds are like, and she's no different."

Though the workouts got harder, with each college offer that came to her door, A'ja silently appreciated her dad's training.

"There will be workouts I do with my dad that I won't talk to him," A'ja said. "I'm that mad that he put me through that workout. He comes up and says, ‘I do it because I love you.' And I'm like, get out of my room."

When she was 12, A'ja told her dad that by the time she graduated high school, she wanted to win a state championship, a gold medal and she wanted to be the best recruit in the country.

"I said, ‘If you're going to do that, then we're going to work,'" Roscoe said. "I told her she was going to have to sacrifice and she wasn't going to be like other kids."

She accomplished all three goals.

When the No. 1 recruit in the country plays in a basketball game, college coaches are bound to be in attendance. In a Heathwood Hall game last year, 27 colleges were represented.

"When they're in the stands, she wants to put on a good show for them," said Heathwood Hall coach John O'Cain. "She takes her game up another notch."

When A'ja decided on her four favorite schools, she called every coach that didn't make the list to tell them the news. She cried while making the calls. Narrowing it down to South Carolina, North Carolina, Tennessee and Connecticut was the hardest thing A'ja said she has ever done.

Picking just one will be even harder, which is why she's waited until the first day of the spring signing period. Basketball recruits typically sign sooner, making A'ja's recruitment all the more dramatic.

A tweet about which flavor of Sonic Slush she should pick was misinterpreted as a metaphor for her college decision, prompting responses from her 3,700 Twitter followers that wanted to know her choice.

The obvious pressure from her friends is to stay in Columbia and pick USC. She's attended Heathwood Hall since kindergarten, and fellow top recruits and friends have signed with the Gamecocks. With South Carolina recently drawing a No. 1 seed in the NCAA Tournament, the push to stay close to home is stronger.

"I think it puts a lot more pressure on her because USC is right in her backyard," said Jatarie White, the No. 7 recruit in the country and a USC signee. "Everybody around the area looks up to her."

A'ja spends time with her 92-year-old grandmother when she needs to escape the basketball world. Her grandmother has never seen her play, even when A'ja's played on national television, because A'ja said she wouldn't want to see A'ja get pushed around.

"She's just stayed the same through all of this," said Chelsea Joseph, a friend of A'ja's at Heathwood Hall. "She's never had a big head or anything. She's really down to earth. She really values family and friends, and that's one of the things I love the most about her because no matter how many offers she gets or how many awards she wins, she's still a family-oriented girl."

She unwinds by watching her favorite show, "Pretty Little Liars," away from her parents, who aren't as fond of it. It's her thing. When things get overwhelming, she and Chelsea will have a venting session at Panera, or they'll watch one of their favorite scary movies together.

In those moments of normalcy, A'ja reflects back on her unexpected, whirlwind basketball career. It's hard not to smile.