Professionals speak out on importance of cursive - DatelineCarolina 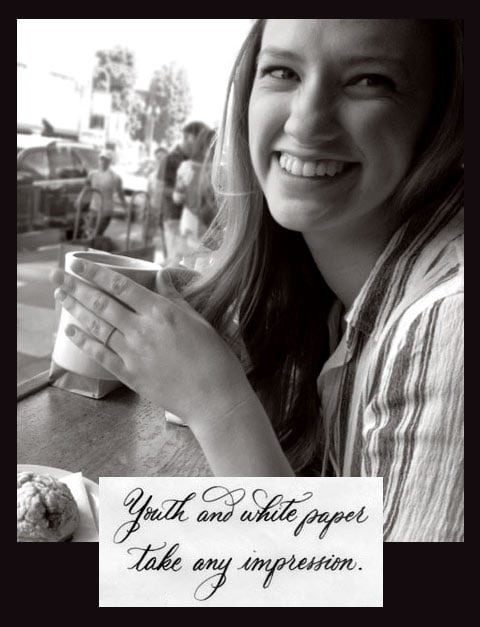 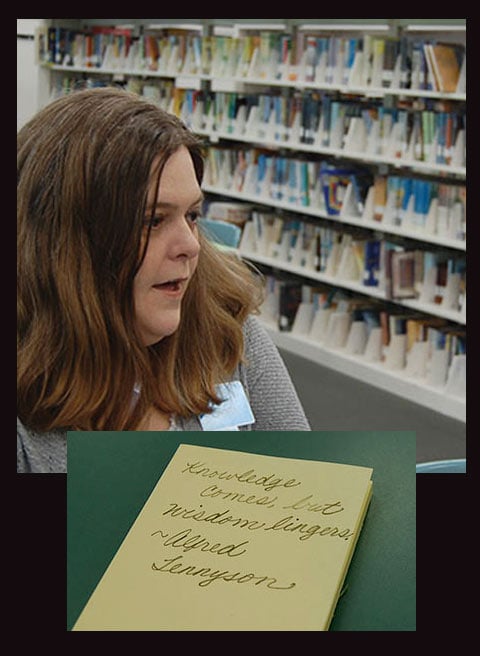 Children's librarian at the Richland Library in Columbia, Laura Rogers, has seen how beneficial cursive is to children with reading and writing disorders. By Isabelle Khurshudyan 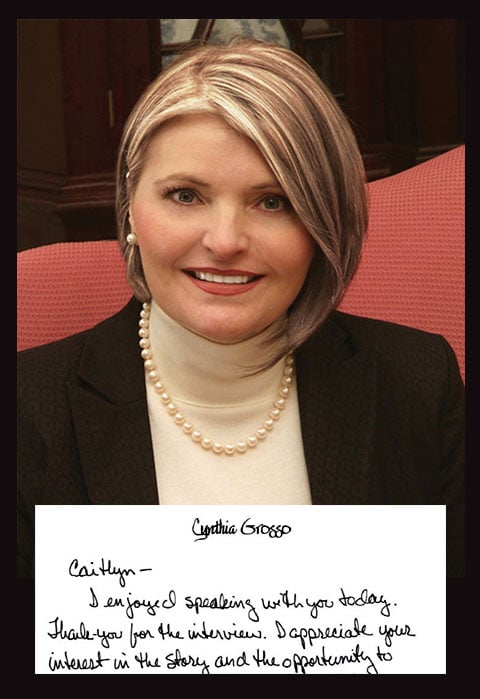 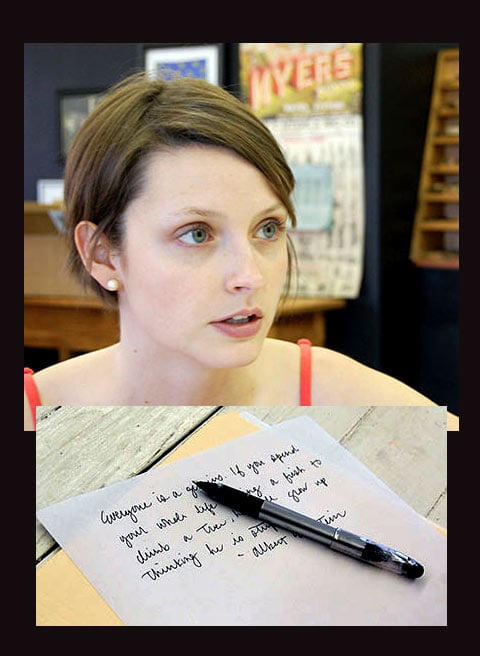 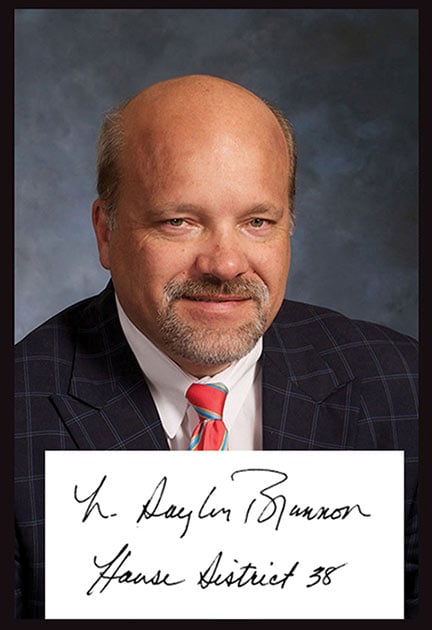 One of the 19 sponsors of the Back to Basics in Education Act of 2013 is Rep. Norman Brannon, who signs his name "N. Douglas Brannon." He said writing in cursive can still be a relevant skill. Photo from Rep. Brannon's office.

Look inside the classrooms of today.  A pen and paper have taken a back seat to computers,  and Microsoft Office is used more often than handwriting.

But some South Carolina legislators think that no matter how advanced technology becomes, students should learn cursive.

The Back to Basics Education Act of 2013 (H 3905) would require students to learn cursive by the time they reach the fifth grade. Cursive lessons have not been included in the state's required curriculum since 2000.

The bill was introduced and sent to the Senate in April after a unanimous House vote.

Rep. Norman "Doug" Brannon, one of the 13 Republicans among the bill's 19 sponsors, said writing in cursive is still a relevant skill, despite the fact that students may communicate only with technology.

"But until you get to a situation which the business world is dealing just in electronics, you're going to have an issue," he said.

It isn't just some in corporate America and legislators who think cursive needs to be taught, though. Here's what a few professionals and parents had to say about the place of cursive writing in modern-day life.

Cynthia Grosso
Owner of the Charleston School of Protocol and Etiquette

"Etiquette says the words ‘thank you' are words you should handwrite yourself. A proper thank-you is not an email and is not a text," Cynthia Grosso said.

An etiquette teacher for corporate professionals and children, Grosso said she's seen the significance of cursive for people no matter their age.

"Formal letter writing is still important," she said.  "It teaches us socialization, but also in personal situations, it's not very appropriate to type a note."

She added that cursive helps in formal situations, such as signing legal documents.

"How will our children sign a lease if they don't know cursive?" she said.

Often overlooked is the relevance of being able to read cursive, she said, not just write it.

"This is a part of our history," she said.  "You can't read a historical document without this knowledge. It shouldn't be a secret message that people can't read because they never learned how.  It's not a different language"

Grosso is teaching her stepson, Jacob, to write in cursive.

"Once Jacob understood the ‘why' part of cursive, he got very into it," Grosso said. "He realized he couldn't study history and couldn't sign his name, so now he's excited about learning it."

Grosso said the way to successfully teach cursive is to empower children to learn it by showing them its significance.

"The personal branding aspect of things, people pay attention to detail," she said.  "They don't realize it speaks loudly about them, and this is what we need to remind the future generations."

Margaret Crabtree said in her business of designing invitations, logos and cards, script is thriving.

A recent trend, she said, is handwritten invitations and blank cards for customers to write in themselves.

"Businesses even request custom stationary and notecards just to jot things down on," she said. "And they'll probably be jotting it down in cursive because it's the fastest way to write."

Crabtree, a mother of two, said she's relieved that her 9-year-old is learning cursive. Despite the increase in technology, she said, sometimes technology can fail, so children need to learn to write in cursive sooner rather than later.

Whether she is helping her daughter with her homework or handwriting a letter for a customer, Crabtree said, writing cursive is a part of her everyday life.

"Not only is it important for this business, but I think it's important as a tradition," she said.  "Traditions like this need to keep going.  I don't want it to be a completely different universe one day."

Laura Rogers
Children's librarian at the Richland Library in Columbia

In her eight years at the children's section, Laura Rogers has seen cursive pay off for children.

"The benefits of children learning this skill are endless," Rogers said. "I work with a lot of kids who have different types of reading and writing disabilities, and cursive has been scientifically proven to be a much better way for these kids to read and write."

"Muscle memory takes 180 strokes for your muscles to learn," she said. "You never forget how to ride a bike because after 180 peddles; your muscles remember it. When a child forms a cursive letter, it is the same thing.  A dyslexic child has to think hard to form a letter, but once they hit that 180 mark, which is harder to do with print, they don't have to think as hard."

Rogers said that since her dyslexic 10-year-old son has learned cursive, she has seen a huge improvement in his confidence and ability to make letters.

She added students can't rely on technology to read and write.

"Of course technology is the fastest way to reach people," she said. "But a lot of students still don't have access to that technology or the Internet all the time. If the technology fails us, these children all need to know what to do."

She fears that if cursive isn't a required skill for children, a whole generation may not be able to read original documents, either.

"I would hate for these children not to be able to read the Declaration of Independence because they never learned cursive," she said. "We can all see why this isn't just a skill that's helpful for children with learning disorders, but for all children everywhere."

To Lydia Hendrix, cursive isn't just words on paper, but a form of art.

"The reason people use fonts like Comic Sans and Papyrus is because they crave the intimacy of a hand-crafted letter," she said. "There is a comfort in it and a human aspect related to it.  This is why it can't die."

Thanks to her time as a calligraphist, Hendrix said, she understands the personal importance of handwriting and thinks it is much more than pretty letters on a card.

She said she hoped that as computer usage grows, people will appreciate the human interaction of handwriting even more.

"You can't express a mood with a computer like you can with calligraphy or handwriting," she said.  "Children should learn to feel this human interaction."

Hendrix fears a generation without cursive is the end of her career.

"If people don't understand cursive, they can't read what I've written," she said. "Today and in the future, I need the mailman to be able to read the address I've written in cursive."

"I never really think about cursive, but that's probably because I have horrific handwriting," said coffee-shop owner Sean McCrossin.

Although he doesn't use cursive on a daily basis, McCrossin said, he couldn't imagine a generation of children losing the skill of handwriting.

"I just think about my grandmother and her cursive," he said. "It was beautiful."

As a business owner, McCrossin said, he can associate many different traits with an employee who has good handwriting like organization and cleanliness, traits he looks for in his workers.

He said he hasn't necessarily thought about whether his workers can write in cursive, but would be worried to find out they lacked the skill.

"If someone came in now to apply for a job and couldn't write their signature, I would probably be judgmental about it," he said.

Despite the support for cursive, some businesses and recruiters still favor technology.

Sherry McAdams, director of USC Upstate's Career Center, thinks cursive is a thing of past.

"I look at dozens of resumes and cover letters, and no one ever includes that they're good at cursive," McAdams said.  "This is a technologically driven world, and there really is no need for cursive anymore."

In the business world, McAdams said, everything should be done as quickly as possible.

"Technology is the only way we can get things done fast enough," she said. "Cursive may be the way for some businesses and people, but not for most."