The Strictest Texting While Driving Ban in South Carolina - DatelineCarolina 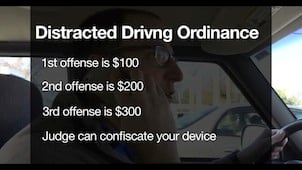 Greenville has strictest texting while driving ban in South Carolina

Billboards were donated and placed all over Greenville in efforts to inform the city of the new law.

The strictest texting while driving ban in South Carolina went into effect on April 1 in the upstate. Greenville communications manager, Leslie Fletcher said the city decided that it's not just texting and driving that causes problems on the road.

"Driving distracted goes so much more than texting and to only focus on texting would fall short of what they were trying to accomplish." Fletcher said.

The distracted driving ordinance bans drivers from using any handheld device, which includes texting, using a GPS, and talking on the phone. Officers wrote sixteen warnings on the first day the law went into effect and were told it was up to their discretion whether to write a ticket or not.

"All we have to have is just someone holding their mobile device while their driving, and we have enough probable cause to pull them over." Greenville police officer Jonathan Bragg said.

"It's always a really good time for me to catch up with people," Duggar said.

While most people would say they could manage using their phone while driving, some know that it is more dangerous than it seems. Teenager Anna Lollis knows that danger first hand. She got into a car accident last year because she was on her phone.

"I was going to the hospital and I couldn't remember where I was going, and as I turned around I looked down at my cell phone and 2 cars were stopped and I slammed into the car in front of me." Lollis said.

"Greenville is progressing so much, the population is growing every month, and we are having more accidents caused by texting and driving or some type of inattention to the road by using a mobile device and its time to implement a law that could potentially save lives." Bragg said.

The law does allow drivers to use a Bluetooth device, speakerphone, or a GPS as long as the phone is mounted somewhere securely and your hands are free.

The distracted driving ordinance was passed in February, but it did not go into effect until April because the city wanted to make sure everyone knew about the new ban.

"We have really tried to identify partners, work with them and get the word out." Fletcher said.

The advertisement includes billboards and signs, posting #putitdowngreenville on social media sites, airing public service announcements, and having a distracted driving simulator course in the Haywood mall. They also reached out to school districts, hotels, the convention visitor's bureau, and event the airport.

"The airport has reached out to rental car companies on our behalf, getting information for visitors flying into GSP." Fletcher said.

The city says the ordinance is a good thing, but some people still have doubts police can enforce it.

"There's still a lot of people that still don't follow the law. They are going to have to have a phone crack down to make it work." Duggar said.

First time violators face a $100 fine. It will cost $200 for a second offense, and $300 for a third offense. At that point a judge can confiscate your device.

But Fletcher says, "it's not about writing tickets, it's about changing behavior. Hopefully soon people won't even think about it, they will just automatically know not to do it."