Their are rules when it comes to hair - DatelineCarolina 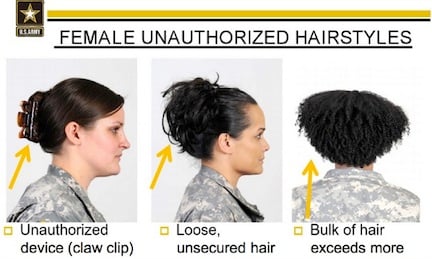 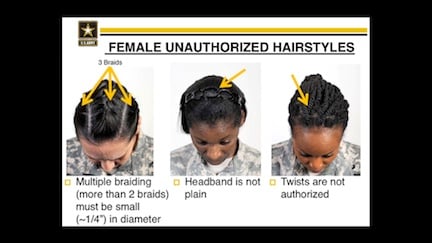 New rules on hairstyles have created controversy to some U.S. soldiers

The United States Army is catching some unwanted publicity after an update that prohibits certain hairstyles on female soldiers while wearing their uniform.

Thousands of soldiers aren't happy about the update and have created and signed a White House petition with almost 10,000 signatures so far. The petition is calling for the army to reconsider the changes.

Lt. Col. S. Justin Platt, an Army spokesman at the Pentagon, commented on the citizens explaining the necessary standards put in place to maintain uniformity within the military.

"Headgear is expected to fit snugly and comfortably, without bulging," Platt says.

U.S. military member Nicole Wright says she wears protective styles for her natural hair and says it is helpful to women in the field.

"It helps when we can do certain things like twists, or when we can do braids and stuff like that and I do believe that the Army is not taking that into consideration when it comes to women with coarser textures," Wright says.

Surveys have found 70 percent of women of color say that they do or have worn their hair naturally and many feel this new Army update confines women with natural hair.

"It definitely means that they're going to be limited in terms of their options for natural hair and it's going to require a lot more maintenance," cosmetologist Claude Brunson says.

Petitioners need to get 100,000 signatures by April 19 to force the White House to consider their protest.