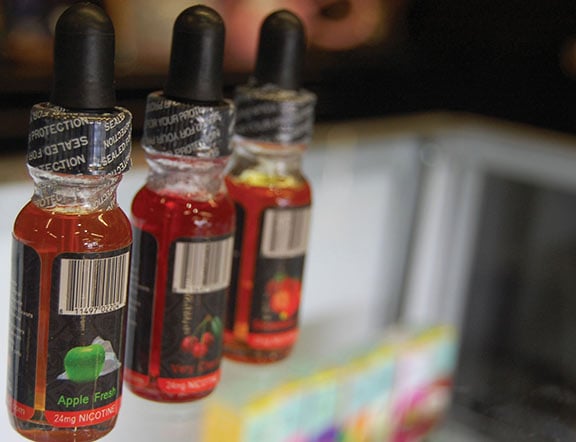 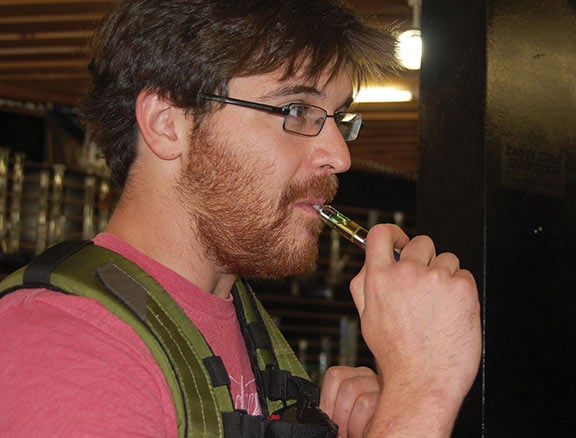 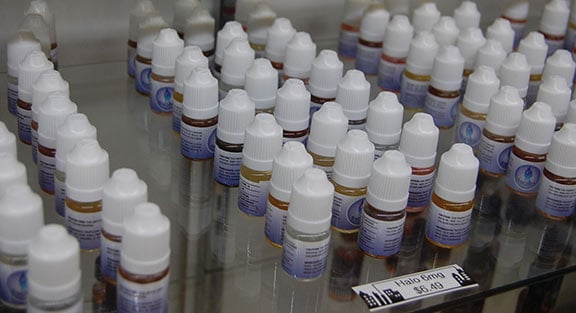 A small bottle of liquid nicotine can last at least a week for a pack-a-day smoker. Photo by Isabelle Khurshudyan. 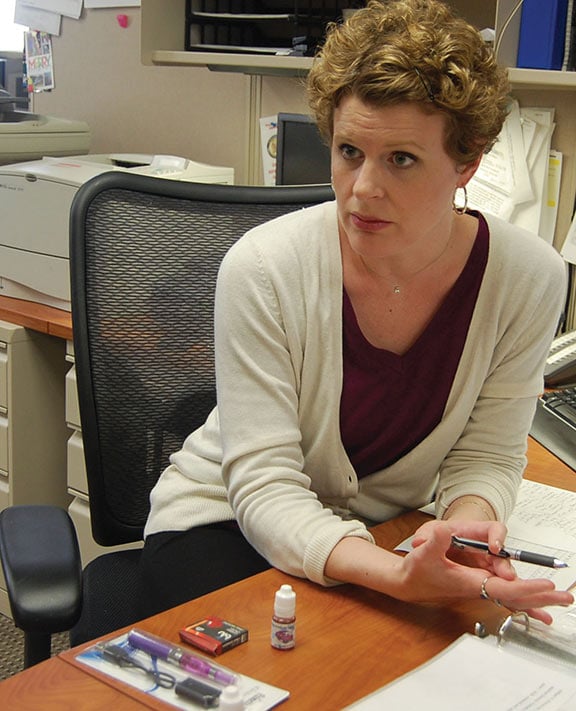 Jill Michels of the Palmetto Poison Center suggests that parents who smoke e-cigarettes hide their liquid nicotine and keep it under a lock. Photo by Isabelle Khurshudyan

By Caitlyn McGuire
The Carolina Reporter

The number of calls linked to liquid nicotine to the Palmetto Poison Control Center at the University of South Carolina increased from 10 in 2012 to 25 in 2013. That 250% increase during the past year led the center, which serves all 46 counties in the state, to issue a public alert this week.

Toxic exposure to the liquid has become a problem not only in the state, but also around the nation, as smoking alternatives rise in popularity.

According to The National Poison Data System, liquid nicotine cases have increased nationally by 300 percent since 2012.

Liquid nicotine used in e-cigarettes can be harmful and or even lethal if ingested or absorbed through the skin.  The liquid is made up of concentrated nicotine, flavoring, vegetable glycol or propylene glycol, or both and comes in an array of flavors and nicotine strengths, including many with no nicotine.

Because the liquids are not FDA regulated and don't have child resistant caps, the fear among safety experts is that children can easily access what could be deadly levels of nicotine.

"Companies have made the liquid nicotine in all these tasty flavors," Jill Michels, an assistant USC pharmacy professor who works at the Palmetto Poison Control Center, said Tuesday. "It smells good to a child, it can taste good to a child and it comes in a small containers possibly similar to a drink or candy they've had before."

If ingested or absorbed through the skin, the liquid can cause vomiting, diarrhea, increased heart rate and, in extremely high doses, seizures.

Michels said most of the calls the poison control center has received have involved children. The number of cases reported in 2012 and 2013 do not include any calls made to hospitals or emergency rooms. Nationally the number of cases linked to e-liquids increased from over 300 in 2012 to 1,351 in 2013, according to The New York Times.  Of the 1,351 cases, the paper said 365 were referred to hospitals, triple that of 2012.

"I don't think people understand. People think, ‘It's not going to happen in my house,'" she said. "A 10-milliliter bottle contains 240 milligrams of nicotine.  One cigarette has only about 15 to 30 milligrams.  We want to send the alert out to let everyone know this is very concentrated nicotine."

Caleb Brown, manager of the High Life Smoke Shop in Columbia, said he agrees that pushing child safety caps should be a priority.  He added that with or without safety caps, it is the parents' responsibility to keep their children away from the toxic liquid.

"This is a tobacco store, so anything you buy here, if your kids get into it, it won't be very good," Brown said. "There's plenty of things kids can get into, like if there is a bottle of Robitusson on the counter, so they need to just think of it like that."

He said that while he hasn't heard any complaints from his customers about the danger of liquid nicotine, he still encourages parents to let their kids know not to touch it.

Despite the safety reports, e-cigarette users like University of South Carolina student Kyle Smith are still big advocates for the cigarette alternative.

Smith has been an e-cigarette user for nearly a year and frequents the High Life Smoke Shop.

"The stuff in the liquid isn't nearly as dangerous as what is in cigarettes," said Smith.  "I've seen people who used to smoke a pack or two a day and decreased their levels of liquid nicotine.  Now they use liquid with no nicotine."

Michels said that parents should talk to their children about the dangers of the liquid, but kids will not always understand the severity of the issue.

She suggests that just like cigarettes, liquid nicotine should not be left in an open area or purse and should be kept in a safe place away from children, locked in a drawer or cabinet.

"Kids know where you keep the gum and the candy, so they'll know the first place to look for treats and can find something bad," Michels said.

If you or your children are exposed to liquid nicotine, immediately call the Palmetto Poison Center at 1-800-222-1222.