A list we we never wanted to be on: prepare to sniffle in South - DatelineCarolina

A list we we never wanted to be on: Prepare to sniffle in South Carolina 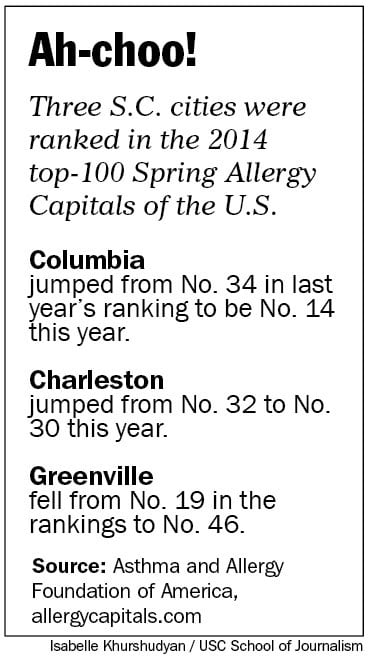 South Carolinians are stocking up on medicine, tissues and eyedrops to prepare for one of the most irritating seasons of the year: allergy season.

The Allergy and Asthma Foundation of America, a trade association for research and education on allergies, has released its annual list of "The Most Challenging Places to Live with Spring Allergies" composed of the nation's 100 most populated cities.

The ranking is based on each city's pollen concentration, how much medication patients are using and the number of allergists certified with the American Board of Allergy and Immunology per patient.

Mike Tringale, senior vice president of external affairs of the AAFA in Landover, Md., said the drastic shifts in rank are normal because of the unpredictable nature of pollen.

"Pollen counts so far are highest in Columbia compared to the rest of the state," Tringale said, noting that allergy season typically starts in the first weeks of April.  "Pollen predictions are half as reliable as weather predictions, and we know how reliable those can be.

"Allergies are worsening, and people are suffering worse than ever before if you want to look at it from a historical perspective," he said.

Dr. Neil Kao of the Allergic Disease and Asthma Center in Greenville agreed that all South Carolina residents, despite the rankings of Greenville, Charleston and Columbia, should prepare for a pollen season just as harsh as the last.

Pollen counts, which weigh heaviest on the rankings, are measured by specially trained allergists for the National Allergy Bureau of the American Academy of Allergy, Asthma and Immunology.

The official counts are given to AAFA to help calculate the city rankings each season.

"The pollen counts in all three of the cities are likely very similar," he said.

"The past few years have been some the worst years for allergies," said Dr. John Pulcini of Acadia Allergy and Immunology in Greenville. "The list is good to look at, but no matter what this year is probably going to be just as bad. People in Greenville, for example, that have always had allergies and use medicine for it won't feel like their allergies are any better this year."

Because of the severity of the pollen, Pulcini said, even those without diagnosed allergies may feel irritant effects, causing similar pollen symptoms like itchy eyes and sneezing.

Pulcini, Kao and Tringale agree that the best way to make it through spring is to attack allergies early because pollen season strikes quickly.

"Patients cannot really diagnose themselves," said Tringale, who suggests that those who suffer consult a physician for treatment rather than treat with over-the-counter medications. "They can target your specific allergies and treat them more appropriately than you can yourself."