Chefs cooking out on the horseshoe - DatelineCarolina 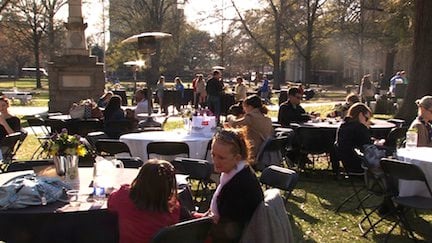 Columbia chefs cooking on the Horseshoe for HRSM scholarship 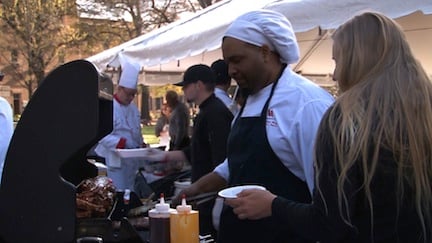 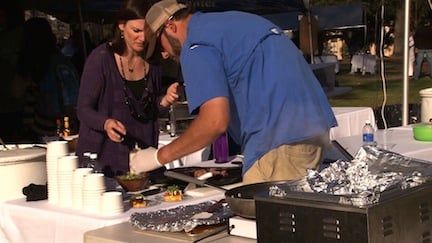 The smell of sweet barbecue and other southern cuisine filled the air on USC's historic Horseshoe Monday evening at the annual Chefs on the Shoe event.

Chefs from around Columbia came out to help raise money for student scholarships in the school of Hotel, Restaurant and Tourism Management (HRTM).

"Chef Pernell never believed students should leave the university so far in debt so we wanted to honor him in some way and the best way we could do it was create a scholarship in his memory," Annette Hoover, the host of the Chefs on the Shoe event, said.

Twenty five dollar tickets were sold to people who wanted to get a taste of all the top Columbia chefs special entrees. They also got to bid on auction items.

Chef Pernell taught in the culinary school for twenty five years and spent much of his time cooking and teaching in the historic McCutchin house. Several of the Chefs at the event knew Pernell personally or had been a student of his at one time.

"Pernell was a real great guy, I met him when I was a youngster in this thing so anything I can do to carry on his legacy Ill do it", Gregory E. Davis, the executive chef of the Marriott, said.

All the chefs said they enjoyed feeding the hundreds on people during the event, but what many people didn't know about was the friendly competition between the chefs.

"This is my second year here and I actually won last year, so I'm the reigning champion, I'm here defending my title," Davis chuckled while cooking up his special barbecue recipe.

Larry Platt, the owner of Let's Cook  Culinary Studio in the Vista, joked with Davis about who this year's winner will be while cooking his vegetable dish a few feet away.

"Oh there is no competition here...I got it!" Platt said.

The Chefs on the Shoe event is raising enough money to provide a one year scholarship to five USC HRTM students. Annette Hoover said they were $1,500 away from reaching their goal before the money from Mondays event was added.

Hoover said she is proud of her festival and tourism management class for planning and executing the entire event with zero budget. Every auction item was donated and all the chefs volunteered their time and resources.

The five students awarded the scholarship fund will be announced in September, and the chefs at this years event said they are already excited about next year, an opportunity to honor Chef Pernell again.