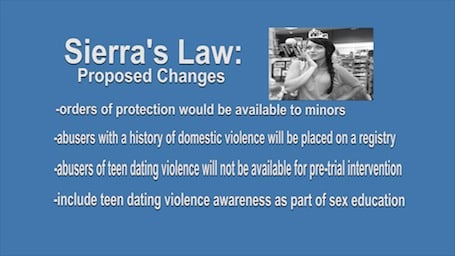 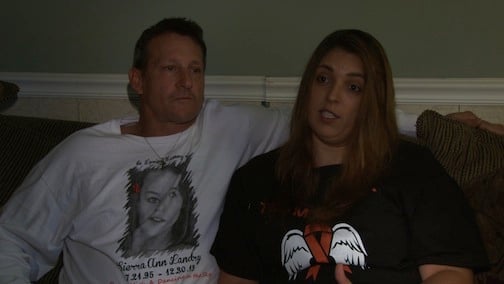 Like most parents, Jessica and Robert Landry were uneasy to let their 18 year old daughter Sierra date.

Their fears only grew when they started noticing bruises on Sierra.

"I finally told her, her dad and I was like, ‘We know you're not falling that much.' You know I know what's going on," said Jessica Landry

The Landry's Sierra was caught in an abusive relationship. They say they wanted to shake her and say "I told you! Why do you keep going back?" but they never did.The Landry's said they would pick her up, bring her home, sit her down and tell her that her relationship wasn't healthy.

They finally say they broke through to her last December.

"The last time she came home… December 14… we spent the best, I mean it was like having her back. She was with us, happy bubbly, energetic, full of life, making plans about the future. It was Sierra again," said The Landry's.

The Landry's joy turned to heartbreak on December 14 when Sierra was shot and killed.

Police say Landry's ex-boyfriend Tanner Crolley shot and killed Sierra while she was at a friends house.

Jessica and Robert Landry say behavior like this is one of the thing's they are hoping to educate people about as a part of a proposed Sierra's Law.

Sierra's Law is made up of a few proposed changes to South Carolina state law dealing with dating and domestic violence. Some of the changes include making Orders of Protection available for minors, taking away the pre-trial intervention option for first-time offenders and making teen dating violence awareness a part of sex education in school.

The Landry's say education is one of the most important parts of the bill.

"If you can teach our kids at school how to put on a condom and how to have safe sex, there is no reason you shouldn't be teaching them how to be in a healthy relationship," said Jessica Landry

When education isn't enough, they want minors to be able to get an order of protection.

More than 300,000 supporters signed the Landry's Change.org petition. The Landry's this shows that teen-dating violence is a universal issue.

"It's a silent epidemic … but now it screams for our attention. It has to be addressed, and that's what we're trying to do is get this addressed, because somewhere out there, there is another child, another teen going through it right now." said Jessica Landry.

Sierra's parents say that even though they weren't able to save their own daughter, they don't want her death to be in vain.

Bills have been introduced into South Carolina state legislature and Sierra's parent hope to see Sierra's Law on the books soon.