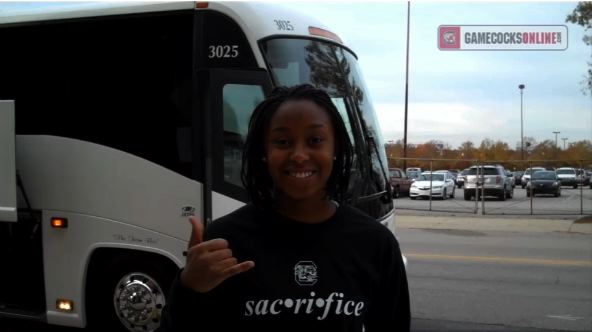 Shelbretta Ball can no longer play basketball competitively, however she still strives to help others.

Shelbretta still travels with the women's basketball team and has grown closer to the girls despite her injury.

Shelbretta Ball is a student-athlete who has known her whole life that she was good at one thing: playing basketball.

She played guard for the Jackson Mississippi Academy, averaging 10.9 points per game, and earned a spot on the MAIS North AAA All-Stars Roster.

"It was a sport that was embedded in my family, so it was automatic that I was going to be able to play," Shelbretta said.

Getting a scholarship to play at USC was a dream that changed her life forever. The celebration, however, was short lived.

Her heart condition kept her from playing the game she loves, but it didn't stop her love of the game.

Bretta now majors in sports psychology, where she is researching the psychological effects of athletic injuries.

She wants to help others who face what she's gone through.

With her research, she plans to help start a psychology initiative to attract more athletes to better utilize the therapy services in the Athletic Center.

Sports psychologist, Dr. Kendra Cusaac, says that it's a stereotype that athletes are often forgotten as regular human beings with emotions.

"Sometimes we just have to remember that they are people that have feelings, that have investments in their craft, and that they shouldn't be overlooked or minimized for that," Cusaac said.

Academic Athletic Director Maria Hickman says some athletes see the need to talk with a therapist as a sign of weakness.

"There's a stigma that student athletes feel like, ‘Oh if I speak to someone, there's something wrong with me.' To get them to understand, the importance of it and the benefits of utilizing it," Hickman said.

Shelbretta wants to continue making an impact on campus by using this research to let others know it's okay to have an injury.

Shelbretta plans to share her research with the SEC and hopefully, with other schools in the conference.