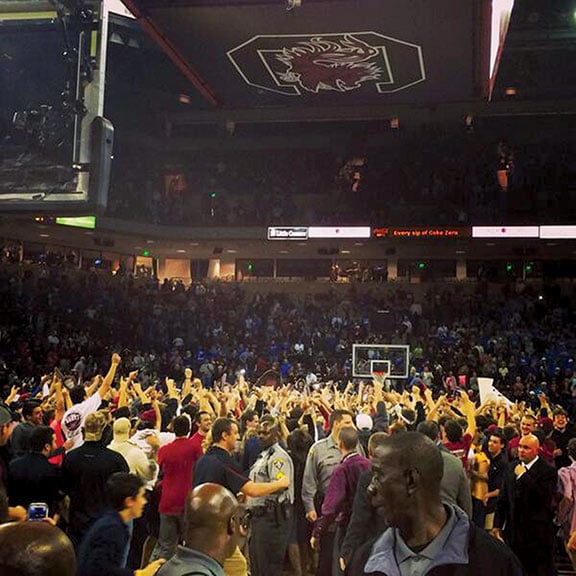 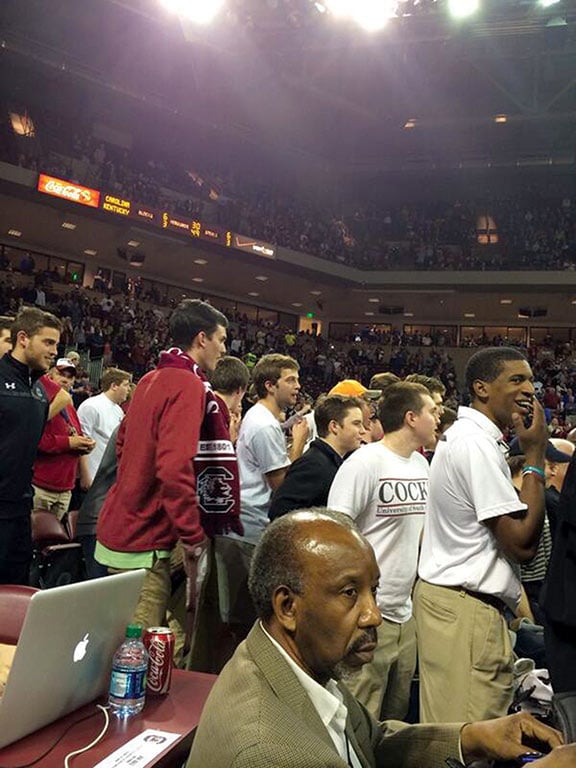 Near the end of the Gamecocks’ winning basketball game against Kentucky, students ignored an announcement reminding the crowd that they were not to storm the court after the game. Photo courtesy of Danny Garrison, The Daily Gamecock.

Unlike the revenue distribution that schools get from the NCAA, the University of South Carolina will not see a penny of the $25,000 fine it was assessed after USC fans stormed the court when the basketball team defeated Kentucky Saturday.

The NCAA distributes bowl and championship payouts evenly to all league members. The money that the Southeastern Conference takes from schools that break its rules do not fall into that category.

The SEC said Wednesday that the fine levied against the USC men's basketball team would be given to its scholarship fund.

Fans stormed the court after the Gamecocks defeated then-No. 17 Kentucky Wildcats 72-67. Even USC President Harris Pastides joined in the "field invasion," which is the official SEC term for the act of spectators crowding a field or court at the end of a game. The SEC's constitution and by-laws do not have a specific rule for field invasion, except for section 10.5, which defines what the conference considers sportsmanlike behavior.

According to Thad Moore, editor-in-chief of The Daily Gamecock, Pastides said, ""Once I realized I was paying [the fine] anyway, I ran down. ... I enjoyed every dollar."

USC has been fined twice before for similar violations. The first time was in 2004 after a football game against Clemson, when it was fined $5,000. The second time was three years ago when it was fined $25,000 after the basketball team beat then-No. 1 Kentucky. This week's fine would have been $50,000, but it occurred after a three-year gap between offenses.

In fact, USC's fine after the Clemson game was the SEC's very first fine for the "field invasion" offense. The incident occurred about one week after an NBA basketball brawl between the Detroit Pistons and the Indiana Pacers.

Craig Pinkerton, the director of communications for the SEC, said all of the fine money generally goes to the scholarship fund.

Steve Fink, USC's media relations director, said he believes in ensuring the safety of everyone involved in college sporting events.

"We support the rule that the SEC put in place," he said.

According to ESPN, a more violent incident erupted during a basketball game between Utah Valley and New Mexico State last month. No students or security personnel were injured during the field invasion, but at least one punch was thrown, and two players were suspended.