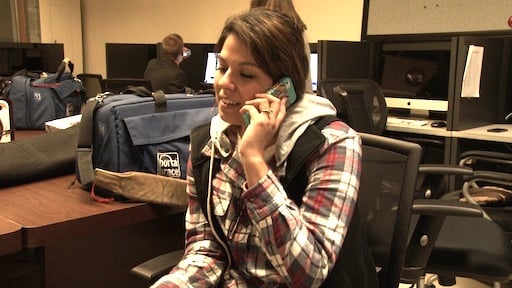 Jackie Moreno keeps her phone close at all times after it being stolen several times.

Eric Shneiderman tells everyone how easy it will be to activate a kill switch.

Apple installed a kill switch a few years ago and has had success.

A bill requiring smart phone companies to install kill switches to try to stop the large, and still growing, theft of phone, has reached the U.S. House of Representatives. Mobile devices are involved in one-third or more of all robberies in some U.S. cities.

USC student Jackie Moreno has had her fair share of stolen phones.

The Federal Communications Commission reported over 1.6 million smart phone thefts in 2012 and the number continues to rise each year.

The proposed law calls for a kill switch on smart phones that would make the device useless if stolen, similar to the way users are able to cancel stolen credit cards.  It would allow the user to remotely "kill" the phone, erase all data and make the phone unusable.

"Cancel it like a credit card once it's stolen, very simple. That will remove the incentive for anyone to steal a smart phone," says New York Attorney General Eric Schneiderman.

"Once again, this is all about corporate greed. Profit," he says.

Apple has already installed a kill switch in it's new operating system, which has turned out to be a big help for Jackie.

"I have so many passwords, I actually have my credit card information all in there, emails, like, anything. My whole life is on my phone, so at least no one stole that. At least that helped me erase everything so that no one can find it," she says.

Phone companies have expressed support for the technology but are resistant to backing the bill.

"It's both a manufacturer and operating system problem. We don't want any instance where its a hackable kill switch," says a Verizon spokesman.

It's unclear if companies are truly concerned about hackings or just trying to protect their profit, but if the bill gets passed they will not have a choice.

Supporters of the bill like former New York Deputy Commissioner John Miller, are pointing to the 1994 decision that made car radios useless when stolen.

"In 1994 they broke into every car and stole every radio in New York until the car people and the radio people got together and said, 'If you take the radio out of a car, it'll never work in another car, this chip doesn't match that chip, they stopped stealing radios. Never happened again," said John Miller.