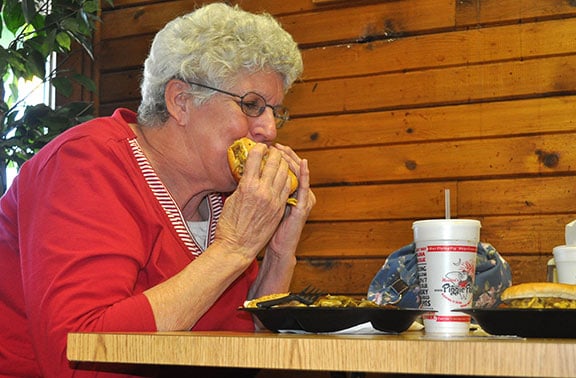 A collection of sauces and collectibles fill a table at Maurice’s Gourmet Barbecue headquarters in Cayce. The restaurants are widely known for their famous “Southern Gold” sauce. Photo by Kyle Heck. 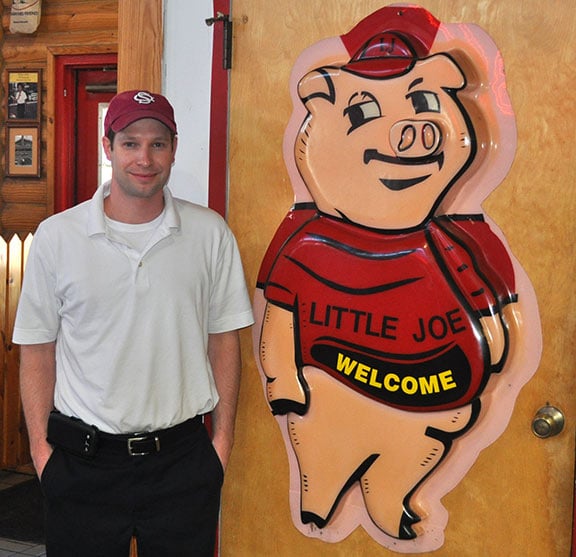 Paul Bessinger Jr. stands beside the pig that welcomes customers into Maurice’s Barbecue in Irmo. Maurice Bessinger, founder of Maurice’s and grandfather to Paul Jr., passed away Saturday after a battle with Alzheimer's. Photo by Kyle Heck.


Nancy Jackson, 60, of Columbia remembers her first date at Maurice's Piggie Park in Cayce more than 30 years ago.

Back then, the car hops would bring "Big Joe" baskets dripping with Maurice's signature Southern Gold sauce with sides of coleslaw, fries and sweet tea. Under a large smiling pig sign and mustard-yellow awnings, the smell of Maurice's barbecue enticed traveler's nostrils and filled their stomachs.

Now the car hops have been replaced with a drive-thru window, and the franchise owner, Maurice Bessinger, has passed away. Bessinger was diagnosed with Alzheimer's disease two years ago and died Saturday.

"I remember parking outside and having the girls serve me," Jackson said. "I usually get the Big Joe or Little Joe basket. I know he has been in a lot of trouble, but I have been eating his food since I was very young."

Maurice Bessinger created a barbecue empire surrounding his signature sauce and meat. However, as the mustard-based sauce, Southern Gold, gained popularity around the Midlands, Bessinger found himself pitted in growing controversy.

"In 2000, after The State newspaper disclosed that Bessinger was distributing pro-slavery tracts at his Maurice's Gourmet Barbecue headquarters in West Columbia – under the shadow of an enormous Confederate flag he flew outside – people began boycotting his eateries," according to The State. "Stores and the U.S. military yanked his well-known mustard barbecue sauce from their shelves. He would claim the boycott cost him millions. "

Paul Bessinger Sr., Maurice's son and owner of the Maurice's Piggie Park in Cayce, said that the controversy overshadowed his father's true character.

"He built a large business and gave stuff away," Bessinger Sr. said. "He was a very charitable person who worked hard. He donated $10,000 to build the Korean War memorial because he was a veteran."

Bessinger Sr. remembers his father as a positive man who rarely took a day off from work.

"You know, a lot of that stuff was his opinion. A man's opinion can't be wrong because it is his own opinion," Bessinger Sr. said.

Larry Lane moved to Columbia from Pennsylvania in 1972. A former public relations specialist in the Army, he visited Maurice's Piggie Park shortly after moving to the area and experienced his first taste of the mustard-based sauce. He has been coming back ever since.

Lane sat down to his pulled pork barbeque sandwich in the restaurant, which closely resembles a pig pen you would have found on a Southern farm.

"In support of Maurice today, I came out and ate his food," Lane said. "I support his food, not his views. He wore his flag for everyone to see. It's hard to defend those ideas, but I have always liked the pulled pork, and the hash is awesome."

Lane said that whenever his friends in Pennsylvania catch wind of him going north, they ask that he bring along some of Maurice's Southern Gold barbecue sauce.

Bob Walter of West Virginia was traveling through the Columbia area and stopped at the Piggie Park for lunch.

"If you're passing through South Carolina, you have to stop for the barbecue," Walter said. "Maurice's was recommended to me by some friends in Charleston. I am a definite fan of the mustard-based barbecue."

Karen Pierce, the general manager of the Maurice's Piggie Park in Cayce, remembers when the restaurant was much simpler than the one that stands today.

Now, 61 years after opening the first Piggie Park in 1953, the landmark restaurant chain operates in 13 locations across the state.

Before, car hops would take food out to cars waiting in the parking lot under the mustard-yellow awnings, and Pierce would serve individual customers through a service window. Now, the restaurant has expanded, and Pierce's service window has turned into a service door next to a buffet-style counter.

A full-service drive-thru has replaced the car hops.

"I worked here handing out food, and now I'm the general manager," Pierce said. "Everything you see here now wasn't here when I first started."

Maurice Bessinger is remembered by his employees, some of which are his own family members, as a hard worker who never took a day off for vacation.

"He was hard working and working all the time," said Paul Bessinger Jr., Bessinger's grandson and manager of the Piggie Park in Irmo. "He would visit every location and interact with guests and employees, making sure everyone was enjoying their time."