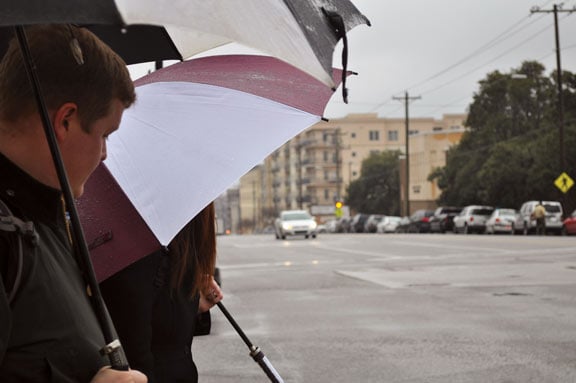 Pax isn't the only storm blowing through the Southeast. Storm Cantore is coming through, too.

That would be Jim Cantore of the Weather Channel, who is covering the storm as it crosses the region and stirring up a buzz of excitement on social media.

The excitement began Monday afternoon when Cantore tweeted that his next stop would be Columbia. The Twitter world quickly latched on.

"Jim Cantore is in Columbia to cover this ice storm. Basically we're all dead."
– @Mikeflach

"Jim is requesting two @UofSC students that would be willing to bum rush him during his live shots!"
– @dooleyc0116

@kenmccan is Kim McMahon, director of campus life and the Russell House University Union at the University of South Carolina. McMahon said she tweeted the invitation to offer Cantore a better experience than the one he had at the College of Charleston on Jan. 29, when he deflected a would-be photobomber with a knee to the groin, sparking a viral sensation.

By the way, Cantore had his own response to @dooleyc0116's fake request for Columbia photobombers.

"@dooleyc0116 @wis10 @UofSC why don't we just put that little pipe dream of yours to rest. Thanks"

Cantore is probably best known for his live coverage of hurricanes and other severe weather events. He has been reporting on major weather with the Weather Channel for 27 years and is one of the most recognizable faces in weather.

Dr. Greg Carbone, a professor in the geography department at USC specializing in climate change and variability, credits Cantore's ability to connect with people to his skill at giving them the facts they need in a way they can understand.

Receiving help from his fans on platforms like Twitter not only helps his reporting, but also strengthens the bond with his audience, Carbone said.

He stayed in Columbia for only a few hours Tuesday, and left at about 12:30 pm for Augusta, Ga.

"Columbia, SC thanks for being so nice and generous during my very brief stay. Next stop, Augusta, GA #Pax"

Cantore's goodbye message received 25 comments on Facebook, both thanking him for his visit and wishing him luck in Augusta.

On Twitter, @Lakecrazy asked Cantore where he would be headed after Augusta. He replied "to bed."