All Eyes on Williams-Brice for NFL Pro Day - DatelineCarolina 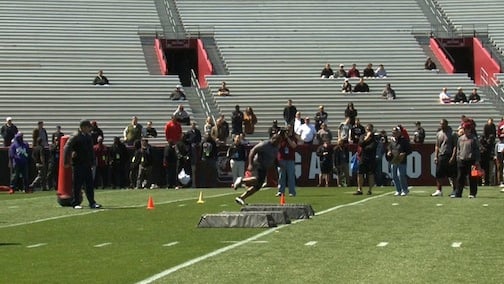 All eyes on Williams-Brice Stadium for NFL Pro Day 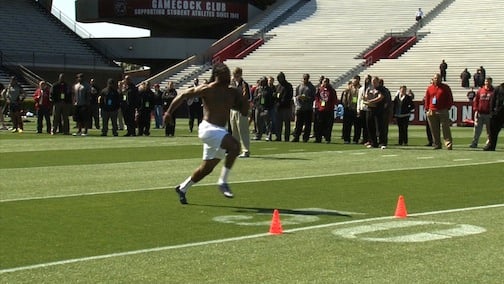 DJ Swearinger is being scouted by four different NFL teams including the Jaguars, the Browns, the Falcons, and the Jets. 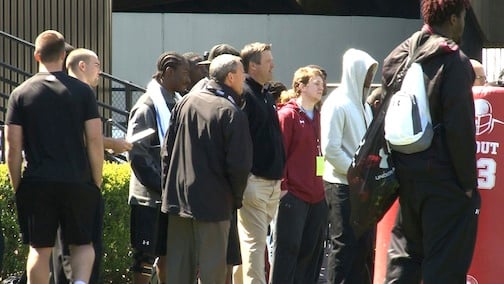 Marcus Lattimore, left, ran for scouts at Pro Day. He was unable to run in the NFL Combine.

All eyes were on Williams Brice Stadium Wednesday for the South Carolina Gamecocks' Pro Timing day.

Fans and NFL scouts covered the field to watch 18 former Gamecock players run drills and work out for a chance to make the leap into professional football.

The New York Jets, the Jacksonville Jaguars, the Atlanta Flacons and the Cleveland Browns are all scouting free safety DJ Swearinger, who said he felt the pressure to perform.

"You don't run a 40 on the football field; You play football, Swearinger said. "So whatever my numbers are, I'm just ready to play football."

Gamecock cornerback Akeem Aguste said he is anxious to play in the pros and willing to play any position.

"I'm going to get in where I fit in to be honest with you," Aguste said. "Special teams? I'll do that."

But there was one player on the field who was watched by everyone: Marcus Lattimore.

Lattimore, who is rehabbing from his season-ending knee injury last fall, surprised the sports world when he announced he will be entering the NFL draft, which begins in New York on April 25.

Though he was unable to run in the NFL combine earlier this year, Lattimore did a limited workout Wednesday for Pro Day scouts to prove he was on the road to recovery.

Swearinger said he wasn't surprised to see Lattimore performing out on the field. "He's a good guy that always works hard," he said.

Aguste said he and the players that are leaving for the NFL aren't worried that their seasons with Carolina will be forgotten.

"Twenty two wins in two seasons is a big deal," Auguste said. "We set the foundation for a dynasty."