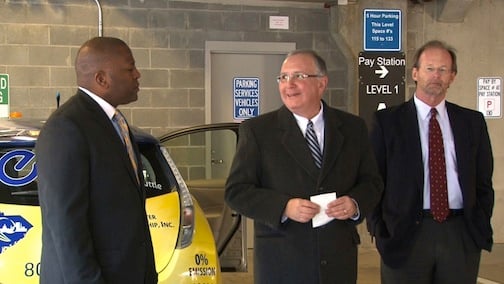 Mayor Steve Benjamin, Matt Kennel, and a city representative say the new shuttle will save the city around $800 per month.

The new shuttle is totally electric.

Columbia has replaced its old shuttle car with a new Nissan Leaf that will make the free shuttle service more proficient.

City Center Partnership, the organization started to manage the city's Business Improvement District, partnered with the city to find a more cost-efficient way to provide transportation in the downtown area.

City Center Partnership president Matt Kennel says while gas prices are one reason for the change, the bigger reason is the resources that were already in place.

"We're taking advantage of the city's electric charging stations. I'm going to be honest with you, they have free electricity available for people with electric vehicles," Kennel said.

Mayor Steve Benjamin says that the fuel-efficient Leaf is a welcome change.

"It shows that if we're going to have a vibrant, urban core, if we're going to be a city of the 21st century... We have to invest in technology. We have got to find ways to do what we do smarter, cheaper, and in a much more environmentally friendly manner," said Benjamin.

Kennel says after months of testing, the Leaf met the standards and picking an electric car was an easy choice. The car gets up to 80 miles per charge.