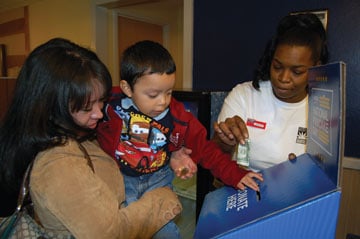 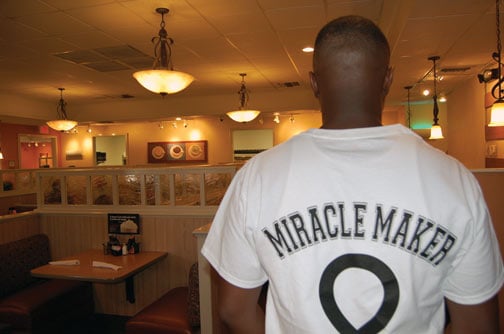 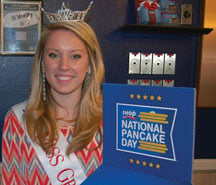 Story and photos by Chloe Gould

Four-person families and little children beam in post-breakfast bliss as they swing past the hostess stand and drop a dollar or two in the Children's Miracle Network blue donations box at Midlands IHOPs.

The batter is made in double-size batches to accommodate the extra patrons, and the sweet and filling scent of buttermilk pushes through the kitchen to the front benches of the restaurants.

Aprons are dusted with 10-pound bags of flour, and the whole staff is exhausted but holding smiles on their faces.

"Until you are covered in buttermilk, you aren't allowed to leave," said Karen Alaimo, manager of the St. Andrews Road IHOP.

Four employees had exchanged their outfits by noon, she said.

"That's how I know we've been working," she said.

The entire staff is on duty at the St. Andrews restaurant for the day prepped with a whole lot of buttermilk batter and motivational speaking.

"We found a few people in the street and they were willing," she joked. "We take everyone."

The St. Andrews Road and Two Notch Road IHOPs were also staffed with 60 Phi Mu sorority sisters from the University of South Carolina throughout the day, Alaimo said.

David Spohn, a Richland County deputy sheriff, was tasked with guarding the big blue donations box at St. Andrews from 9 a.m. to 2 p.m. In the past, people have tried to steal the donations money, Spohn said, so IHOP paid to have the money watched.

Although the short stacks are free, most customers dropped rolled up dollar bills and loose change in the box to support the day's cause.

Victor Sanchez, a 2-year-old regular of the St. Andrew's IHOP, peered over the top edge of the box with a little help from his mom and waitress. He is well known by the wait staff, making about two or three visits a week, and even slips behind the counter for a quick goodbye hug from Alaimo.

He donated $2 and a few extra coins.

Two of those children, David and Kate, have been treated at the hospital and work closely with the Miracle Network. And, hopefully, their mom, Carrie Schelling, will take them to IHOP after school, Schelling said.

David was 8 months old when he was diagnosed with Kawasaki disease, which primarily affects the heart. He spent two weeks in the children's wing of Palmetto Health before it was a stand-alone hospital.

He's now 8, in third grade at Hammond School in Columbia and completely healthy. He doesn't even have to list heart condition on his school forms, Schelling said.

His sister Kate was 3 when she started having seizures. After the new Children's Miracle Network hospital opened, she was treated there— where, Schelling notes, each floor is a different theme — and still makes routine visits for MRIs related to her condition.

"It's really nice to have a spot for the kids that's just comfortable," Schelling said.

She also noted that her family loves pancakes.