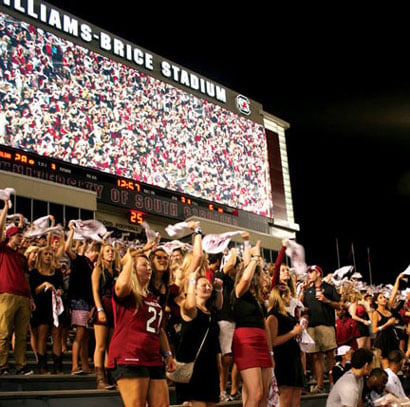 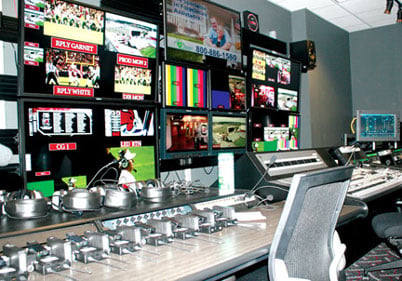 On gameday, 13 staffers from the control room inside Williams-Brice Stadium operate the ribbon boards and replay video of football plays, captured by one of the eight cameras around the stadium, on the scoreboard. 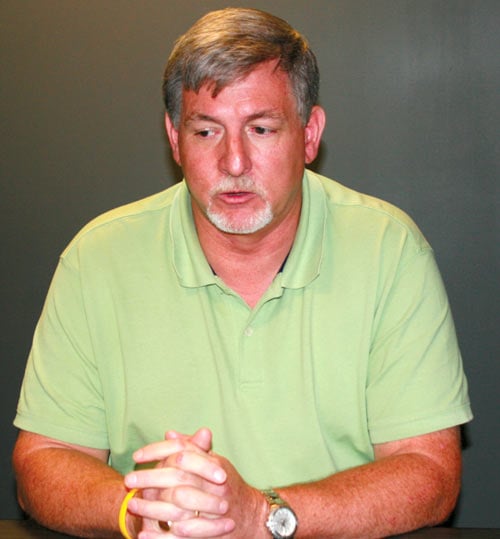 The USC Gamecocks were up 28-6 against the visiting University of Alabama-Birmingham Blazers in the third quarter of an ESPN-televised primetime home football game, the second home game of the season.

USC students bounced up and down with smiles across their faces, in the student section, as they watched replays of the Gamecocks' touchdown drive on the new high-definition video scoreboard. With music blaring to hype up the mostly USC crowd, the scoreboard has become a welcome addition to William-Brice Stadium.

While fans cheer the home team on, 23 people are working behind the scenes to ensure the $6.5 million scoreboard runs smoothly.

The video scoreboard was constructed over the summer with components from several manufacturing companies and installed by Daktronics, a company that designs electronic scoreboards.

The company uses light-emitting diode (LED) technology for the scoreboard. The light-emitting diode produces concentrated light at different colors more efficiently than an incandescent lamp, lasting 50 to 100 times longer than normal light bulbs, and at a reduce cost.

David Cockfield, USC football game day producer, said people involved with setting up the scoreboard have been working 12- to 14-hour days the last six weeks prior to the Sept. 6 home opener against the East Carolina Pirates, which the Gamecocks won 48-10, to get everything in place and so far, everything has been going pretty well despite some issues with the system.

"We had some problems but we're working through them," Cockfield said. "A lot of the equipment is state of the art and we're trying to get up to speed on it."

He says the USC administration has been planning for two years to replace the old scoreboard. Cockfield said he privately had his doubts but he went "numb" after the administration publicly announced the stadium was getting a new football video scoreboard.

Cockfield said it's pretty gratifying working with his colleagues to run the scoreboard and he likes the new experience it brings to the fans.

"What I like the most is it's clear; you can see it. You feel like you're in front of the game," Cockfield said.

George Rogers, USC All-American running back and 1980 Heisman Trophy winner, was in attendance for the USC-UAB game. Rogers said he likes the new scoreboard because of the new perspective it brings to the home games.

"It's great because it makes the game livelier," Rogers said, as fans rose to their feet and let out a jubilant cheer as a USC defender returned an interception for a touchdown against UAB.

John Smith, an 11-year-old USC fan who has been attending home games for a couple of years, said he likes the new scoreboard because it's bigger and clearer than the old scoreboard.

"The old one was pretty good, but the new one will bring more people in," Smith said.

Katherine Hyman, a USC senior who has attended all USC football home games since her freshman year, and Senoqua Browne, a USC junior, both said they liked the new scoreboard better than the old scoreboard.

"It really gets me more hyped up for the game than the old one," Hyman said.

Cockfield said the staff is now where he expected them to be as far as running the video scoreboard.