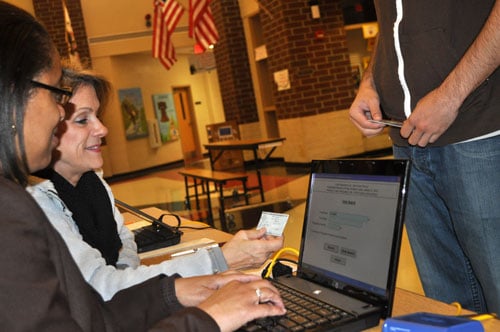 Turnout was heavy, but there were few lines at Oake Point Elementary

There were just two voting machines and a turnout heavier than usual for a primary, poll workers said, but the line didn't grow any longer than 10 voters at Oak Pointe Elementary in Irmo.

Precinct captain John McCants Jr. said the line stayed short because everything was running smoothly. As of 11:30 a.m., 261 people had voted, which he said was better than the last primary, even though it rained most of the morning.

It didn't stop Nick Bailey from coming to vote for Mitt Romney.

"What he's done in the business world, with the Olympics and as governor is just really impressive," said Bailey, 32. "He sounds to me like the person who can get something done in Washington, which we haven't had in a while."

However, Bailey, who also voted for Romney in the 2008 primary, called himself a moderate and said if Newt Gingrich wins the Republican nomination, he would not vote for him.

"I can't support Newt Gingrich. He just doesn't have the morals that I have. I can't support somebody who's cheated on his wife and is just a cranky, angry person," he said. "I don't get a good vibe from him."