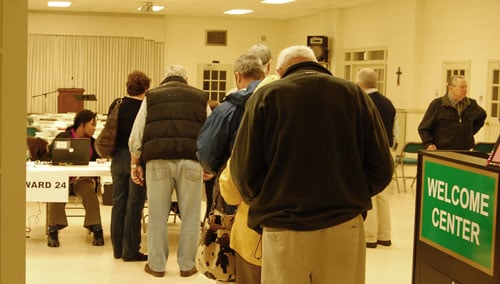 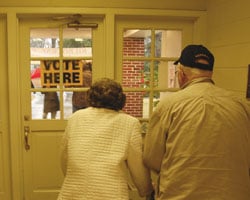 Older voters waited in the entranceway for the rain to subside, standing next to friends who gave one another warm greetings while families rushed in sheltered under umbrellas. Journalists from the Washington bureau of Polish public television, Telewizja Polska, sought interviews amid the mayhem of the American primary process.

"That woman was 99 years old," poll manager William DePass Jr. exclaimed after helping one woman out the door.

Pat Stakis, 74, and husband Anthony, 75, said one thing above all persuaded them to brave the weather.

"Get rid of Obama, get the Democrat out of there," Pat Stakis said. "He's been a terrible president."

The couple said they only decided Friday night between Mitt Romney and Newt Gingrich. They said they wanted someone who could debate Obama, and theysaid Romney wasn't up to the task.

Gingrich's ferocious debate performances, especially in Thursday's CNN debate, have been credited with his rise in the polls.

Anthony, 44, and Shannon Hayes, 34, did not decide on Gingrich until Saturday morning. Stopping as he carried their 2-year-old son, Oliver, out the door, Anthony said Thurdsay's debate was the "deciding factor," especially the way Gingrich lashed out at the media for focusing on his past marital infidelities.

Richard Sturl, 46, decided on Gingrich about a month ago.

"I just think Newt's the one that can beat" Obama, Sturl said. But he said he would support whoever is the eventual nominee.

Sturl said he wants Obama's health care legislation repealed, but he wants the Dodd-Frank Act, which overhauled financial regulation, repealed even more. He blames Obama for causing the recession to linger. Sturl couldn't remember whom he voted for in the last Republican primary.

"Wouldn't have mattered," he said, walking out the door. "Anybody but Obama."