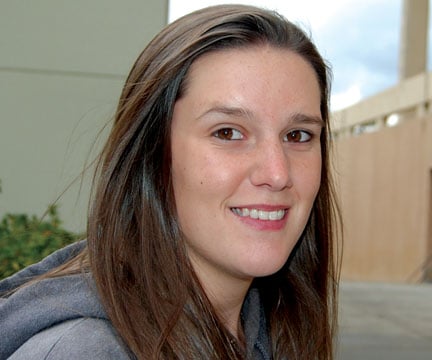 I cried when my best friend told me she was gay. I cried because I couldn't even imagine how it would be for her in our Bible-beating conservative town. I really cried because I didn't have a clue of what else to do: I had never met a lesbian in my entire life, and in five minutes I realized I had actually been around one for the past two years.

It was quite an eye-opener for a 17-year-old girl whose parents adamantly tried to make her go to church every Sunday.

Miranda and I attended the same basketball camp for a week the summer before our sophomore year in high school. One night, she rudely eavesdropped as I was on the phone telling my boyfriend how much I needed a cigarette despite playing three games a day.

Miranda's ears shot up when I said this –she also smoked – and, just like that, two 15-year-old girls became best friends thanks to nicotine. It seems sort of pathetic now, especially since I don't smoke anymore.

Each day after school, and sometimes during, we would drive to an abandoned athletic field on the edge of town where we would sit and smoke for hours. Skipping school and smoking cigarettes seemed like the best way to give the middle finger to the rest of the world.

The first few times, we just dabbled in small talk. Later, I began spilling my heart out to her about how my grandmother Me-Me had died unexpectedly on Mother's Day. Miranda gave me the best advice on heartbreak I'd ever heard. I saw that she knew what it was like to hurt, and she might even know more than I.

It seems like we lived on those bleachers for two years. Winter, summer, rain or shine, we were there talking about our lives, where we came from and what that had to mean for our futures. It never came up that she was gay until the semester before we were set to graduate. When she realized her sexuality didn't change anything between us, she said, "Seriously, for a 4.3 GPA, you really are an idiot."

Apparently, I was supposed to have figured it out on my own. I jokingly told her I was offended that I wasn't her type.

Our friendship changed only minutely after that. She did persuade me to attend a drag king show one evening at a local lesbian nightclub. I had a surprisingly wonderful time.

I've always heard that you lose friends once you graduate high school, and I think for the most part that probably is true for the conventional friendship. Luckily, our friendship is anything but conventional. In fact, she just let me know this morning that she finally bought her dress for my wedding this May. She's my maid of honor.

My in-laws are going to freak if she brings a date. I'm going to love every minute of it.