Gamecocks Take Out Tigers 3rd Year In A Row - DatelineCarolina 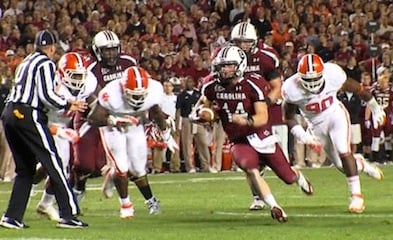 Gamecocks Take Out Tigers 3rd Year In A Row

This year marked the Gamecocks 80th meeting with the Clemson Tigers, where Conner Shaw ran for a touchdown and threw three more touchdown passes, including the longest touchdown pass of his career, a 49-yard strike to Bruce Ellington.

"I feel like my confidence is boosting game by game the more I play," said Shaw. "I have a better feel for the game and I'm starting to see the bigger picture."

At half time Clemson was trailing by only a touchdown, which made for an exciting second half. Shaw ran the ball up and down the field as South Carolina's defense gave little breathing room, if any, to Clemson's offense.

By the end of the night the Gamecock defense had five sacks under their belt, two going to senior defensive end Melvin Ingram.

The USC win was sealed when Shaw shot an 18-yard pass to star wide receiver Alshon Jeffery for a touchdown.

"The most disappointing thing to me coming out of this game-we let the quarterback beat us," said Clemson coach Dabo Swinney.

The win was number ten for the South Carolina Gamecocks this season, making the record 10-2. This is only the second time USC has had that many wins in a season in the school's history.