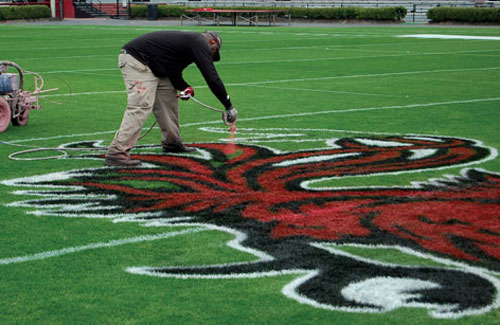 Eddie Dunning has been at USC for 35 years, and for the last 28 years has been a groundskeeper.

Eddie Dunning will tell you that when legendary USC administrator Sarge Frye asked you to get something done, you found a way to do it. So it was that Dunning says Frye told him in 1984 to paint the Fighting Gamecock logo at midfield in Williams-Brice Stadium.

He had no formal art training, but Dunning went to work. His deft strokes have created the logo ever since.

"I didn't know I could do it when I first started," Dunning says. "When I first did it out there, all I had to remember was that the Lord had spoken to me, and he said, ‘Today, I'm going to make you a very important man; all you have to do is have faith in me.'"

Creating the logo takes several days on a blank field. First, Dunning and other grounds crew members lay out a 38-foot-by-28-foot stencil at midfield to create a dotted outline. Once the stencil is removed, it's Dunning's show as he starts free-hand painting the Gamecock and the "C" that surrounds it.

Dunning, 56, grew up in Cameron, about 45 miles southeast of Columbia, and still lives there. In 1976, he rode to work with a relative employed at USC hoping to find a job. He says Frye, the former head of USC's grounds and landscaping, hired him to do landscaping around campus. In 1983, a member of the grounds crew fell ill, and Frye asked Dunning to step in and take care of the baseball field.

He was hired to be a full-time groundskeeper the next year, and caring for the football fields, especially painting the logo, became his responsibility.

"I'm not an artist now, but I can paint any logo," says Dunning, who has also painted the fields at South Carolina State and Benedict College.

Once the "bird," as the grounds crew calls it, is stenciled, Dunning takes a can of white paint and marks a few corners that will become the "C" that frames Gamecock.

Dunning works alone while the rest of the crew works in teams to paint yard markers, numbers and other logos on the field.

"I don't mess with him while he's painting the bird," says Donald Robbins, a member of the grounds crew for three years.

In 2001, Gov. Jim Hodges awarded Dunning the Order of the Silver Crescent, which honors recipients' contributions to South Carolina. Dunning says it's his proudest moment as a grounds crew member.

He was also honored as USC's 2011 Teammate of the Year by athletics department employees.

Dunning says he'll occasionally let a visitor paint a few strokes, but only under his supervision.

"He doesn't ask for much help. And those logos are the toughest part, the most tedious," says Donnie Lindler, a supervisor who has worked with Dunning for eight years.

After laying down a white outline of the logo, Dunning goes to work with water-based garnet and black latex paint. The paint cures to the grass, saving damage to the turf. He fills the logo in stroke by stroke with two pressurized airless paint sprayers, alternating between the colors, which he says saves time.

Working from the head to the tail, Dunning lays down a few strokes of one color and steps back to check his progress. He doesn't use any markers to show where to spray. He says it's second nature after so many years.

Away from Williams-Brice, Dunning says he helps older people in his neighborhood maintain their lawns. He's a trustee at his church, Brown Chapel A.M.E. in Cameron, where he helps with maintenance.

Every month, Dunning picks up food from Harvest Hope Food Bank in Columbia and brings it to his hometown. He distributes food to about 150 needy families.

Dunning says he hopes others will do the same for him one day.

Once the Gamecock dries, Dunning lays out strings to paint the "C" around the logo, using a tape measure to ensure it's centered. He outlines the "C" in white, then methodically fills it in with black paint. Dunning says this is the easiest part of the job.

"It's downhill from here," he says.

Dunning has missed only one game since he began working on the grounds crew, a 1992 game against 16th-ranked Tennessee, to attend his mother's funeral.

He says he told football coach Sparky Woods why he'd be gone, and Woods told him the Gamecocks would win for Dunning and give him a game ball. USC held off the favored Volunteers, 24-23, and Dunning still displays the ball at home.

Dunning believes his painting abilities are God's gift. He graduated from St. John's High School in Cameron, now called Calhoun County High School with no formal art training. He says people are surprised when he tells them.

"When I first started doing it, I didn't brag about what I did because I knew it came from up above," he says. "The Lord said, ‘You have faith in me and you won't have to look for work.' And it just went from there."