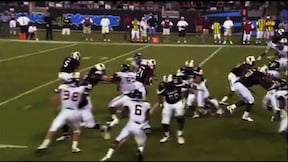 Marcus Lattimore to Have Knee Surgery

USC's star running back Marcus Lattimore is having surgery to repair his torn ACL and MCL. Lattimore's knee was injured in the Gamecock's game against Mississippi State.

Lattimore collided with a Bulldog defender. The injury ended his 2011 season. He says he never expected something like this to happen him.

"I see it all the time. I seen torn ACL's… torn knees… achilles' all the time," Lattimore says.

USC Med school orthopedic surgeon Chris Mazoue says an ACL tear is one injury that cause the worse problems for football players.

"The ACL ligament, because of where it's located, because of the stresses across the knee especially rotational stresses… we usually have to reconstruct that. We can't repair the original ligament but we have to rebuild the ligament," Mazoue says.

Mazoue says athletes typically recover at a 90 to 95% success rate after these procedures.

"At this point an ACL injury, for the vast majority, people are able to get back to the level of competition that they were able to play before," he says.

Lattimore will have his surgery this week.