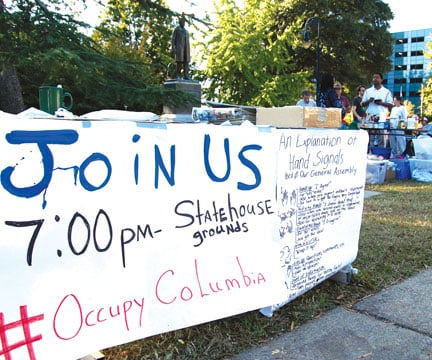 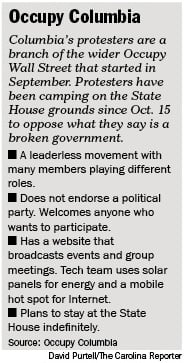 Update: On Nov. 23, Circuit Judge Alison Lee signed an order allowing Occupy Columbia protesters to remain at the State House until a Dec. 1 hearing. Protesters are allowed to be on the grounds day and night and can bring camping gear. On Nov. 21, protesters defied Gov. Haley's 6 p.m. curfew, but they were not told to leave and no arrests were made.

On. Nov. 16, Haley said that protesters could not stay on the grounds after 6 p.m. That evening, 19 people were arrested after refusing to obey the curfew.

The State's article on Haley's statement and the arrests.

Read Haley's letter to the DPS and BPS regarding Occupy Columbia.

Jessica Smith had planned to go to New York to help Occupy Wall Street. Then she heard about Occupy Columbia. Now, the unemployed single mother spends her days and nights on the State House lawn, protesting what she says is a government system that hasn't worked for years.

Each morning, Smith helps move the protesters' gear to designated areas and helps keep the makeshift kitchen clean and organized. She's been there since the protest began Oct. 15, and she stays because, at age 29, she says she wants a better future for her 12-year-old son, Dakota, whom she sometimes brings to the protest.

"People can be a part of something and change history," she said.

A year ago, Smith was working inside the State House with a furniture company that restored the building's antique tables and chairs. She says she lost her job when business slowed and has been living with friends and family, whose generosity helps take care of her and her son.

Occupy Columbia is part of the larger Occupy Wall Street protest that started in New York City and has spread around the world. Protesters cite many reasons for their involvement, but a common theme calls for an end to the link between big business and government.

Smith is among about 30 protesters who spend nights in a sleeping bag on top of tarps on the north side of the State House, looking down Main Street into the heart of downtown. They work together to recruit members and plan marches around the Columbia area.

Protesters have been a constant sight on the State House grounds for nearly a month. Every day, they wave signs like "Who owns you?" and "Wake Up, Speak Up, Join Us" to passing motorists at Main and Gervais streets.

Each honking horn gives encouragement to keep going, they say.

Smith's there for her son

Smith said she became fed up with the education system because it doesn't work and that it doesn't give her son a chance to succeed because some teachers don't care. She wants to repeal the No Child Left Behind Act and said the country needs a new approach to education. She home schools her son with the help of family members and friends.

"I'm definitely not the only parent who has withdrawn their child from public school because they believe the public school system is a joke," she said.

Smith said the protesters generally get along well and work together to solve problems. But occasionally there are disagreements. "We have a very diverse group and we bump heads, but we're all here for the bigger picture," she said.

The protest is viral

Allison Snipes spends most of her day on a Mac laptop. She is part of the protest's tech team, and the 21-year-old University of South Carolina student is helping Occupy Columbia use social media to spread its message.

Snipes said she joined the protest because the media weren't justly covering it. She also thinks that education in South Carolina needs to be fixed, especially in rural areas where she's met students who couldn't read.

The group broadcasts events live on its website and has a Facebook page and Twitter account. The tech team has a wireless Internet connection and uses solar panels to power the laptops that send the group's discontent to the digital world.

Snipes said social media helps connect the protest to others around the world.

"The good thing is that we can link up with other occupations, know what's happening over there, what are they doing," she said.

For those who've lost their voice

Dillon Corbett said he's protesting because greed has taken over the country. The 21-year-old USC student, who took the semester off to focus on his job doing business audits, helps keep the protest focused.

Corbett is there whenever he can get away from work and often leads group meetings. He works to make sure communication is kept up among the protesters.

Corbett thinks the protest can grow much bigger. He brings up the rally that helped get the Confederate flag removed from the top of the State House dome in 2000.