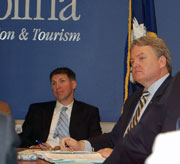 State Treasurer Curtis Loftis made his opinions heard at the Budget and Control Board meeting Thursday.

Some state Commerce Department workers will be able to earn more money if they recruit more jobs to South Carolina – they'll get a commission.

The two-year test program approved by the State Budget and Control Board Thursday will cost $50,000 to$75,000.

The nine state employees eligible for the extra money will get still more if the jobs they land are in rural areas.

This will reward people for bringing jobs to the state, Commerce Secretary Robert Hitt said. But treasurer Curtis Loftis criticized the plan.

"People are getting paid on getting jobs, not on the completion of the work," he said, and companies could still back out of the deals.

The commissions would be paid when a company signed a "performance agreement," to locate in South Carolina. However, companies can pull out of these agreements.

"Sure there's the risk of jobs that don't materialize, but that's your risk to manage, not ours," he told Hitt.

Few details about the test program were given at the meeting. Hitt was not available after the meeting and phone calls seeking details of the program were not returned by a spokeswoman for the department.

Transportation Secretary Robert St. Onge Jr., who is trying to manage a financial mess at the highway department, received an icy welcome from the board again.

"I'm not going to be happy with anything you say today," Loftis said.

The department has dealt with a deficit, unpaid bills and unfilled work orders. In August it had to get a $52 million advance in federal funds to pay contractors.

Loftis said the Transportation Department lacks transparency and is not forthcoming with useful information.

"The DOT just never, ever believes it's part of state government," Loftis said.

St. Onge said a key problem has been a lack of coordination between the engineering staff and the finance department. The groups now meet weekly to increase communication, he said.

Haley said after the meeting that the problems are just further evidence the department's governing board, the South Carolina Transportation Commission, needs to be eliminated.

"We could get a lot more done without the commission," Haley said. "The wheeling and dealing of the commission and the swapping of deals is wrong."

Haley said she should work directly with the transportation secretary to ensure that state money is spent on roads.