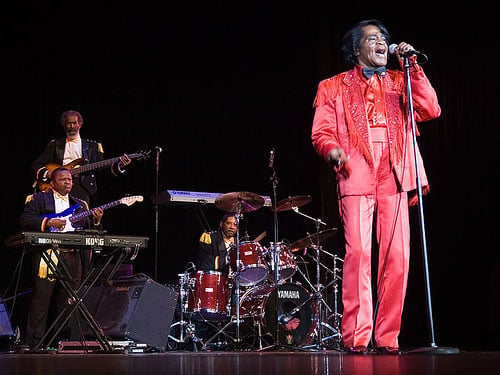 Former Attorney General Henry McMaster never investigated whether soul singer James Brown was unduly influenced in creating a trust or his mental capacity when signing his will that included the trust, a lawyer for the state told the S.C. Supreme Court on Tuesday.

Toal responded that South Carolina only requires a person be mentally competent and aware of the estate, not "wise, smart, or shrewd."

The court is being asked by two former trustees of Brown's estate to renegotiate a settlement that gives Brown's family half of the trust with the rest going to scholarships for needy children in South Carolina and Georgia.

The trustees dismissed as part of the settlement, Robert Buchanan Jr. and Adele Pope, want all of the money returned to the trust instead of part of it going to Brown's wife and children.

The gist of the case is this:

• In 2000, Brown created a trust as part of his will leaving all his fortune to scholarships for schools in South Carolina and Georgia.

• After Brown died on Christmas Day 2006, his family and the trustees argued over the whether Brown, who lived in Beech Island, was unduly influenced in creating the trust and his mental capacity.

• In 2009, McMaster, then the S.C. attorney general, stepped in to argue the case for fear the state wouldn't get any money from the trust.

• McMaster brokered the settlement that gave Brown's wife 25 percent of the trust, his children 25 percent and the remaining half to scholarships.

According to the Associated Press, Brown's millions had dwindled to $14,000 and his estate was struggling with more than $20 million in debt. Since the settlement, a manager has stepped in to pump money back into the trust from licensing deals.

Toal also pressed Jones on why the attorney general would settle for half of the trust when, according to the will, South Carolina and Georgia stood to gain it all. Officials felt it was better to be certain the state would get some of the money, rather than risk it all, Jones said.

McMaster had no right to negotiate on Buchanan and Pope's behalf, according to their lawyer, James Richardson Jr. The attorney general can speak his mind on the trust, Richardson said, but cannot litigate and sign a settlement on behalf of the trustees.

Richardson argued for the reversal of the settlement and restoration of the funds.

It remains unclear what the value of the trust is. Toal asked Jones why the attorney general had not investigated its total value. Jones began presenting numbers, but Toal cut him off saying none of the numbers were reflected in the court documents.

Richardson argues more money could have been made from the interest on the trust than the brokered deal with the family over selling song rights.

One of the central questions unanswered questions is whether Brown's wife, Tomi Rae Hynie Brown, has any rights to his fortune. When she married Brown, she was still married to another man in Texas. However, that man had two other wives in Pakistan.

Tomi Brown later had her first marriage annulled. But Toal questioned whether her marriage to James Brown was legitimate.

Jones argued that the marriage to Brown was legitimate since the previous husband had wives Tomi Brown didn't know about.

Four of the five current justices heard the case. Justice Costa Pleicones was replaced by retired Justice James Moore of Greenwood, but no reason was given. The court will announce its decision later.