A House of Mourning - DatelineCarolina 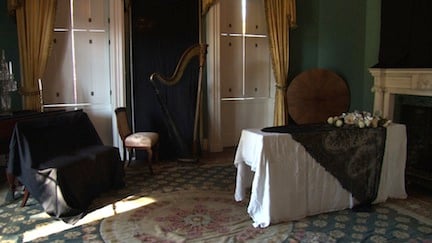 A 19th Century House of Mourning on Display in Columbia 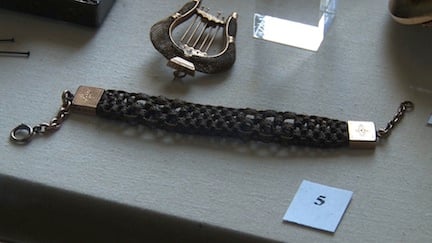 Brooches and bracelets were made out of hair, oftentimes the hair of the dead, were just some of the few accessories worn for mourning ceremonies.

Imagine walking into your living room and seeing a corpse.. and no, this isn't a crime scene... it's how people mourned the loss of loved ones in the 1800's.

Every October, the Historic Columbia Foundation, transforms the Robert Mills House located on Blanding Street, from its usual 19th century luxurious self to a more conservative scene to represent a House of Mourning exhibit.

A coffin in the living room seems rather bizarre today but in the 1800's it was a tradition says director of the Mourning House Exhibit, Fielding Freed.

"People didn't want to be buried alive, they came up with patented coffins that had special ringing devices, escape devices and it was also during the wake when the body is actually in the house," he says. "Oftentimes they would tie a string to the fingers that would go to a bell incase they woke up"

At the exhibit you can expect black hats and plain flowers that will take the place of lavish arrangements and black drapes covering portraits and mirrors.

"Once a superstitious act, covering mirrors remained a tradition that discouraged vanity during the time of mourning," says Margie Richardson, the exhibit tour guide.

The detailed history of the exhibit is designed to make you feel as though you really are walking into a wake taking place in the 1800's.

"Public mourning was just that, it was something people when you run down the street after losing a loved one people knew you were mourning just by what you were wearing," says Freed.

One expectation that might surprise you is that women mourning the loss of a husband were expected to wear black for no less than a year and a day explains Richardson.

The Robert Mills House will be keeping the 19th century alive, by remembering the traditions of the dead. Opened Tuesday through Saturday from 10 a.m-4 p.m., Sunday, 1-5 p.m. and closed Monday. Tickets are $6 for adults, $3 for children, and free for members.