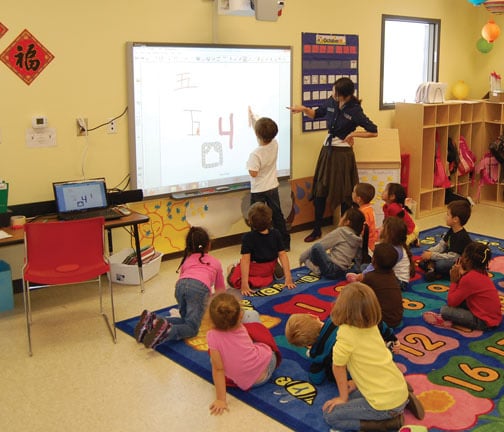 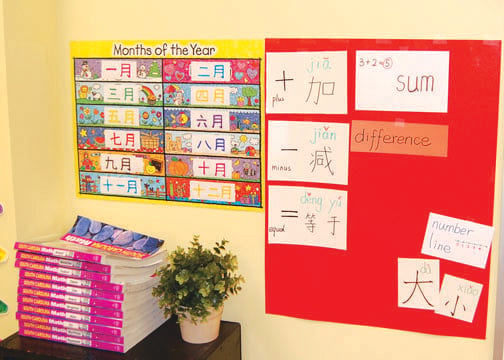 Ask Maggie, a second-grader at East Point Academy, to count to 10 and she'll happily do it – in Mandarin.

Her teacher, Michelle Sun, says it's time for math. On the whiteboard are both Arabic numerals and Chinese characters. Sun starts speaking in Mandarin – "one plus one equals two" – while pointing to the numerals, and students repeat the phrase "Yi jia yi deng yu er."

Earlier in the year, they learned how to say numbers in Mandarin; now they're learning how to say "plus" (jia), "minus" (nia) and "equals" (deng yu). Seeing the Arabic numerals while hearing the teacher say them in Chinese lets students associate words with visuals.

Second-grader Natondi – school officials would not allow last names to be used – said learning Mandarin is the best part of the school. "We learn and know how to write a word every day," he said.

East Point's classrooms have been carved out of an old shopping center in Cayce, a fenced-in playground taking up part of the parking lot and a vacant former Taco Bell out front. The school teaches students as young as 4 Chinese at a time when educators say learning about different cultures is increasingly important in today's globalized world.

By being immersed in Mandarin, which is spoken by more than a billion people, East Point's 100 students learn a new language and develop an understanding of China, which has become a major player in the world economy.

Only nine of South Carolina's almost 900 public elementary schools offer language immersion, and East Point is the only one where all the students learn a language, said Ruta Couet, a world language specialist with the S.C. Education Department.

Mandarin is used to teach math and science because those subjects, with their hands-on approach, fit the teaching style best.

Kindergartner Jabari said he likes to play Chinese games. "We get points and try to see whoever wins," he said.

The students say they also enjoy singing songs in Mandarin, which helps them learn the language.

"It's all about using gestures and visuals to help the students make connections," principal Renee Mathews said.

First-grade teacher Meng Wen, 26, arrived in the U.S. this summer. Teaching is part of her graduate studies at the Beijing Language and Culture University.

"The students are great, and they are learning fast," she said.

Keela Amacher said she and her husband, Adam, decided to enroll their 4-year-old son, Dane, in the pre-kindergarten program because they thought it would interest him, but also because of the long-term benefits of learning Chinese. "He's doing really well," she said.

China has over 1.3 billion people and the world's second largest economy after the U.S. It has become one of the world's major trade partners.

Allison Shipman said she thought it would be good for her 6-year-old daughter Hope, who was adopted from China, to learn the language and culture. When her 7-year-old son, Grayson, was told about the school, he became interested too, she said.

"They're already speaking Chinese" with each other when they come home, Shipman said.

Couet, with the state's Education Department, would like to see more immersion programs in schools. It's increasingly important for students to learn a second language in today's multicultural world, she said.

"The challenge is to find highly qualified people both in the language and with the ability to teach," Couet said.

Caroline Everington, associate dean of Winthrop University's College of Education, said children in other parts of the world are more likely to be bilingual and that immersion programs are the most effective way to learn a second language.

However, she doesn't expect to see many more immersion programs anytime soon in U.S. public schools.

"We are very isolated" as a culture, she said.

In 2009, Tim Daniels, the superintendent of South Carolina's Charter School District, told Xian Wu, a USC math professor, about his idea for a Chinese-oriented school. Daniels has an adopted daughter from China.

The men developed a plan for the school to open in August 2010. But lack of state money delayed the opening a year, said Wu, who continued working on the plans after Daniels left for a job in Pennsylvania.

As part of the statewide charter district, East Point must rely on state and federal money. But with South Carolina's budget woes, money was tight.

The Legislature appropriated enough money for the fiscal year that began July 1 so that East Point could open this August with about $7,000 per student, compared with an average of over $11,000 for other South Carolina public schools.

Mathews, the principal, said East Point is modeled after Waddell Language Academy in Charlotte. That public school offers programs in German, French and Japanese as well as a Chinese-immersion program that began five years ago and now has 200 students.

"Not only are they bilingual," Waddell principal Ynez Olshausen said, "96 percent of the students are proficient in math and reading."

Olshausen said a program's first year is always challenging because people are skeptical but that it doesn't take long for parents to see the benefits.

Mathews said interest in East Point is growing and that she is confident the school will be a success. And Maggie will always be ready to count to 10 if you ask her. "Yi, er, san," she says. One, two, three.