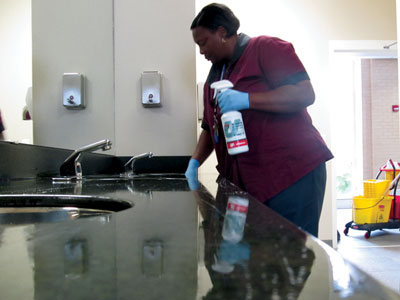 Behind the Scenes: USC custodian takes pride in her job 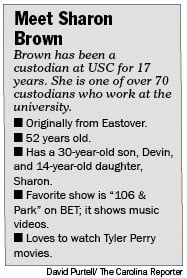 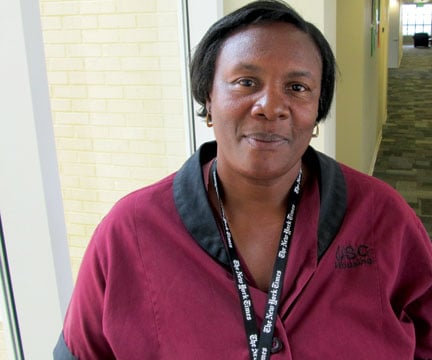 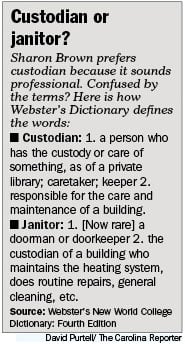 Sharon Brown steps into the elevator at the Honors Residence Hall and heads to the sixth floor. She grabs a bottle of cleaning spray from her yellow mop cart and quickly wipes away any smudges on the silver door, then turns to give the metal hand railings a swift rub.

"I don't like marks on walls and windows, or anything," she says.

Brown, 52, has been a custodian at the University of South Carolina for 17 years. About 75 housekeepers, janitors and similar staff, take care of USC's dorms. Their constant cleaning and fixing keeps the dorms livable for over 6,000 students.

Most of what they do is unsung, but perhaps noticed a bit more with the release of "The Help," a film about black domestic workers in the segregated Deep South of the 1960s. While those days are gone, 85 percent of USC's janitors are still black.

"Times are different," Brown says, "but it's still mostly black people doing this type of work."

Brown, who is black, gently pushes her cart off the elevator. A long hallway stretches in front of her, and a study room is on the right.

She goes into the study room, sweeping the floor with rhythm and ease, then grabs her spray and wipes the windows in a clockwise motion.

Originally from Eastover, Brown came to USC in 1994 after working as a seamstress in a couple of sewing factories.

"After high school, I pretty much took any job that was out there," she says.

But Brown says she grew tired of the factory women's gossip and decided to seek a new job. A cousin who worked at USC suggested she apply to be a janitor.

She applied and was hired shortly thereafter.

"It's about the job security," she says, "I could make more money somewhere else, but who knows how long it would last."

Brown leaves the study room and meticulously sweeps her way down the long, narrow hallway.

Rachel Carter, a freshman, walks by and says, "Hey, how are you?"

"Sometimes they can be shy at first, but they're always very nice," she says.

Brown's work doesn't go unnoticed by students like Greg Isales, who lives on the floor.

"I know she's there because it's always clean," he says.

Another student, John Lim, says, "I'm busy as a student; it's nice to know someone is taking care of the dorm."

Brown continues sweeping and vigorously cleaning marks off walls and doors, bending over to get pesky shoe marks.

She shines drinking fountains and cleans desks and tables, picking up trash along the way. Her silhouette is framed in the morning light as she cleans a window and hums Celine Dion's "Because You Loved Me."

"It's a beautiful song; I just fell in love with it when I first heard it" says Brown. "It's the ringtone on my phone."

In a small lounge area on the fifth floor, Brown and the dorm's five other janitors meet for lunch.

Their favorite lunchtime show, "The Young and the Restless," plays on a 12-inch TV. Empty Bojangles' boxes litter the table.

"Oh, have mercy. Let me tell you about Sharon," co-worker Allen Brown says jokingly. He has worked with Brown for two years and says she's like a sister.

"We look out for each other; she's a good supervisor and good friend," he says.

"I get attached to the people," Brown says.

"She trained me and looks after me," Thompson says.

As a group the janitors say they're happy with their jobs and that making students comfortable is a serious matter.

"We're here for the students. That's our job, it's what we do," Brown says.

After lunch, Brown heads to the Honors Residence Hall's first floor to clean the public restrooms. She cleans them every weekday and cleans the bathrooms in the students' rooms once a month.

She wipes the countertop and cleans the mirror, pausing to tuck her hair behind her ear. Water splashes gently as she scrubs the sink.

She gives the toilets a speedy scrub, dipping the brush in each bowl. Then she glides a mop back and forth across the tile floor.

Next are the stairs.

Brown climbs and sweeps, sweeps and climbs, each step echoing in the stairwell. She runs a damp rag down the railings and wipes the windows as the afternoon sun shines through.

Around 4 p.m., the janitors from across campus head over to the East Quad dormitory custodial lounge to talk about their day. Brown rests while her supervisor, Sally Gownes, talks. Gownes has been at USC for 27 years and says Brown "has my back" and is in charge whenever she's gone.

Brown heads home at 4:30, tired but ready for work tomorrow.