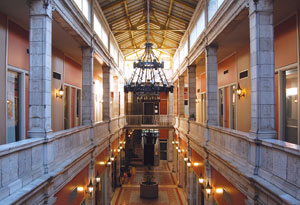 Walk into the Equitable Arcade on Main Street, and it's hard to figure out the almost 100-year-old building's purpose. There are several salons, a boutique, a deli and a cobbler. The smells of incense, bacon, hair products and grandma's basement linger and mingle.

Then you turn the corner of the L-shaped building and find a row of artists' galleries lining both sides of the two-story main hall.

While much of the focus of Columbia's arts scene has been on the trendy Vista and its galleries, 15 artists have made their home about six blocks northeast in what was Columbia's first indoor shopping center. The Arcade, on the National Register of Historic Places since 1982, is unique in Columbia.

Art Studios in the Arcade, a group formed by the artists, has called the space home for about a year. The artists have participated in Open Studios and First Thursday, events that encourage people to see art in Columbia and rediscover Main Street.

Jan Swanson, who was looking for a studio for her oil paintings, discovered the Arcade because her son owns Swanson's Deli, which is in the building. She noticed the many unoccupied shops and offices and saw potential for studio space.

"We came into a building that didn't have a lot going on and helped to bring a variety of different artists in," Swanson says.

Eric Stockard, owner of S&S Art Supply three blocks north on Main Street, is glad to have more artists nearby.

"Professional artists are about 50 percent of my clientele," he says. "And having the art studios there helps make Main Street more whole. It brings a cultural aspect, not just a financial one."

"There's something in here that's very conducive to creating. It's got good bones," she says.

The Arcade, which wraps around the Barringer Building, was built in 1912. Terra cotta panels with urns and cherubs line the walls. A skylight illuminates the wide corridors. The building's entrances on Main and Washington streets, have identical recessed facades with marble columns.

"It is a very striking building," says Andy Chandler, architectural historian for the South Carolina Department of Achieves and History. Because the Arcade has been preserved, it looks very similar to how it did 100 years ago.

Since the building was originally a shopping mall, each space has a large front window, that lets the artists use the space as both a studio and gallery.

"This gives me a space to be creative, a place to meet other artists and a place to show my work," says Suzy Shealy, who works in many mediums, from batik to oil to pastel.

When the Arcade was built, it was in the heart of Columbia's main commercial district, says John Sherrer, director of cultural resources with the Historic Columbia Foundation, who is glad to see more activity in the building. While many of the city's retail shops have moved to the Vista and Five Points, Main Street is becoming a commercial district again.

"It is a structure that lends itself exceedingly well to small businesses. You have access to all of the downtown amenities, and you can put yourself in the middle of a lot of folks," he says.

Shealy says that while she prizes having her own space, she also enjoys being able to quickly consult with fellow artists.

"I have the fluidity of being able to come and go as I please, but I still have the support of my peers here in the Arcade and the encouragement," she says. "And it's so nice to be able to knock on somebody's door and say: ‘Hey, what do you think? Do you think it needs something?'"

The artists are also excited about the potential for closer ties to the Vista. City planners have suggested Columbia make Assembly Street, described by some as a six-lane highway, more pedestrian and bike friendly by widening the median and adding a long, narrow park.

Blyth, who rides her bike to the studio, says Main Street and the Vista play off each other well.

"We have a local, unique feel," she says. "Main Street has a character about it that you don't really find anywhere else in the city. And in this building, you can't help but be inspired by what's around you."