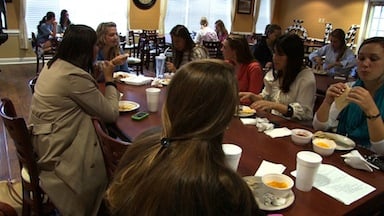 A National Association of Anorexia Nervosa and Associated Disorders study found nearly 24 million people in the US suffer from an eating disorder. The study highlights the national Body Image and Eating Disorders Awareness Week.

USC Sophomore Sarah Davis is one who battles the problem of bulimia.

"I thought that maybe if I was skinnier I'd be prettier and then maybe my boyfriend would like me again," she said.

Sara said that because losing weight made her feel good about herself, she continued to count calories and skipped meals completely.

"We have about five to six hundred students, both male female, that do suffer from them," Carrico said.

She says many students get ideas about how they should look from the media and share them amongst their friends.

"It's unfortunate," she says. "Our best friends should be our biggest support network, not the ones re-enforcing those negative ideals."

Sarah says although she is getting better, each day is still a struggle and some days are harder than others.

"It took me a while to be more comfortable with myself because I had low self esteem and once I started eating again, the weight came back on, so that was the hardest part, seeing that I was returning to normal size," Sarah says.

She hopes to serve as an example for others suffering from eating disorders.