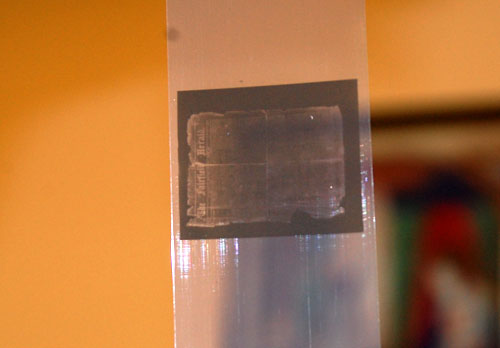 Historic newspapers now available at the click of a mouse

Santi Thompson is the director for the South Carolina Digital Newspaper Program.

Pieces of South Carolina history that used to be tucked away in libraries, like your great-grandparents' wedding announcement or newspaper advertisements from 100 years ago, are now alive on the Internet.

The South Carolina Digital Newspaper Program has digitized over 100,000 pages of historical South Carolina newspapers, using a grant from the Library of Congress and National Endowment for the Humanities.

"This is a huge gift to researchers and historians and genealogists, too," said Patricia McNeely, a former journalism professor at the University of South Carolina who recently authored a book on Southern correspondence during the Civil War.

The convenience of being able to access historic papers online helps researchers because they can search through documents more efficiently, she said.

Over the past two years, the project has added 103,543 pages to the database from 19 newspapers. That includes 10 African-American newspapers, among the few black papers preserved from that era.

Election headlines, updates on the Civil War and announcements of the circus coming to town give a glimpse into what life was like in South Carolina.

"It's allowing people to connect to some sense of history," said Santi Thompson, the program's director.

Many of these newspapers had been available only on microfilm. You would have to go to USC's South Caroliniana Library or others in the state, take a roll of microfilm to a reader and scroll through it to find what you were looking for.

But, McNeely said, "All the time you spend going through microfilm takes hours and hours."

Now, you can search South Carolina newspapers on a database through the Library of Congress and have results instantly.

"As long as you have an Internet connection, you can look at newspapers as soon as they've been digitized any time you want," Thompson said.

McNeely said the convenience of having historical newspapers online could open up new areas of research simply because the papers are now available with a few clicks instead of on microfilm.

So far, 24 other states and Washington, D.C., have added newspapers to the database. Thompson said he hopes it will eventually include newspapers from all the states.

He sees values aside from academic research. For instance, a group used the database to help to design costumes for a play based on clothing advertisements of that era, and many people have used it to dig up articles on relatives, Thompson said.

The National Endowment for the Humanities began giving out grants to catalog and microfilm historic newspapers in the 1980s. USC got its first grant in the early 1990s for $397,893. Those microfilms are now being digitized as part of the National Digital Newspaper Program.

The South Caroliniana Library has 1,249 newspaper titles on microfilm dating to an issue of the South Carolina Gazette from 1732. Many of the digitized newspapers come from this collection, said cataloging librarian Craig Keeney.

South Carolina's digitization project started with a $350,000 federal grant in 2009. The project was given an additional $325,000 this August to continue its work.

The program will digitize papers as far back as 1836 and up until 1922. Newspapers after that can't be digitized until their copyrights expire.

"We want to make as many newspapers in South Carolina available as we can," Thompson said.