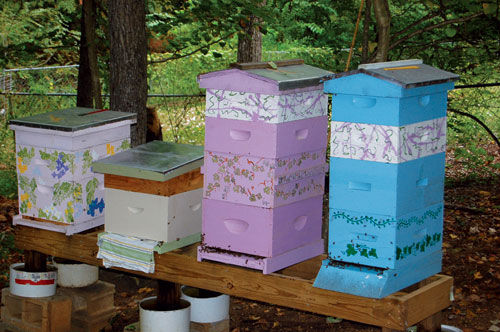 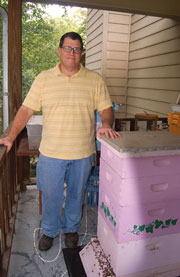 Tom Ballou keeps some of his hives on his front porch. 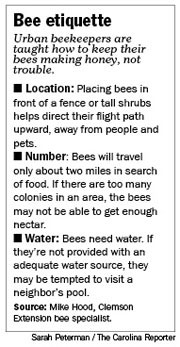 About once a month, Tom Ballou puts on his protective gear and tends to the 300,000 bees he keeps in the eight hives at his house – a house surrounded not by farm fields but by other houses as close as 150 feet away in suburban Lexington.

"My wife talked me into it," says Ballou, who began three years ago with two hives. "But now I just can't get enough."

Beekeeping is a relatively inexpensive and quick way to take part in "urban homesteading," which encourages city and suburban residents to become more self-sufficient and lessen their environmental impact. And while much recent attention has been on keeping chickens in Columbia, some people are also discovering that backyard beekeeping can be a sweet hobby, whether it's listening to the buzz over morning coffee or harvesting gallons of honey yearly.

"Superficially, it can be very intimidating," Ballou says, "but it's really quite simple and rewarding."

To ease any fears about the stinging insects in close quarters, urban beekeepers are trained on where to put the hives and how to make sure the bees have enough food and water so they don't endanger pets or people while pollinating fruits, vegetables and flowers.

For instance, bees fly in and out of one entrance on the hive. If this entrance faces away from commonly trafficked areas and is near tall shrubs or a fence, the bees will fly higher, away from people.

Beekeepers do get stung, but they are quick to say bees are generally docile.

"Bees are very busy with their coming and going. If you don't bother them, they don't bother you," says Wes Bommer, Mid-State Beekeepers Association president.

About 150 people in the Columbia area have gotten hives over the past few years, according to Bommer. An aspiring beekeeper can expect to spend about $250 on things like a hive box and frames, a bee suit and, of course, bees.

Bommer estimates that there are about 1,500 urban beekeepers statewide.

"People in the city, especially, become aware of plants in bloom that they'd never seen or paid attention to in the past once they start keeping bees," Bommer says.

Ballou, who also has 18 chickens, sees the bees as exotic pets.

"They have their own interesting and fascinating behaviors that are fun to watch," he says. He likens the hive to a small city with each bee having a special job, whether it's pollen gatherer or housekeeper.

He likes to watch the bees as they come and go. He says it's relaxing, like watching fish in an aquarium.

"And the hive gives off different aromas. Sometimes, it's like fragrance coming from a flower garden." Ballou says.

Hives can smell floral, waxy, earthy or musty, depending on the time of year.

Donna Fletcher, who has three hives, says her suburban neighbors often watch her work with the bees and ask for honey.

The certified master gardener says she took the Mid-State Beekeepers Association course because she was interested in how bees could help her flowers. But now she says she's "smitten" and refers to the bees affectionately as "her girls."

She had also heard about Colony Collapse Disorder, which leads to large-scale deaths of honeybees, and wanted to learn more. Several beekeepers and bee experts said city bees are less susceptible because the flowers they collect nectar from in urban areas are less likely to have pesticides, one of the things contributing to the complex problem.

Beekeepers are quick to tell you about the benefits bees provide to everyone. They help pollinate $25 million worth of commercial crops a year in South Carolina – watermelons, cantaloupes, cucumbers, squash and others, none of which would grow without proper pollination, Clemson Extension bee specialist Mike Hood says.

"Since we do a lot of large-scale vegetable production, it's necessary for the pollination of our crops, and the ideal pollinators are honeybees, so it was a no-brainer for us to go in that direction," McClam says.

City Roots hopes to eventually have about a dozen hives and to sell the honey.

The honey from urban bees also has a different flavor than from their rural cousins, who are more likely to be rented out to farms across the country to help pollinate their crops. City bees forage for nectar and pollen wherever they can find it. Tulip poplar, black gum and holly trees are often popular among bees around Columbia, Hood says.

Ballou harvests as much as 8 gallons of honey from his hives each year. He looks forward to seeing its shade of amber and taste, both of which change each year. He says his spring honey is usually lighter than honey harvested in the fall, but this year the honey was darker than usual and had a fruity flavor.