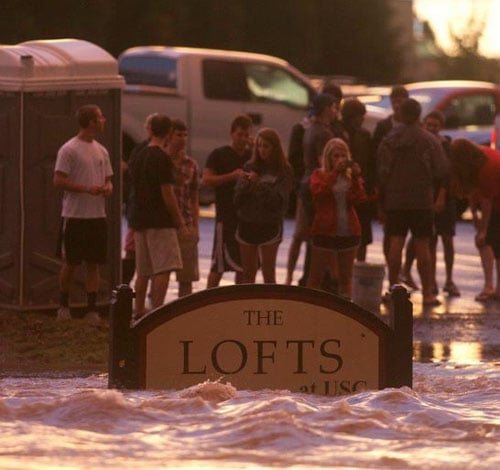 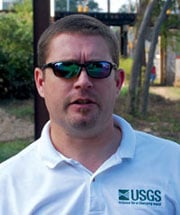 A student apartment complex near the USGS gauge at Main and Whaley streets was among the areas flooded in Sunday's storm that dumped 3.24 inches of rain on the area between 5:30 and 7 p.m., according to the National Weather Service.

The USGS gauge registered 12.39 feet in Rocky Branch, the highest since the gauge was installed four years ago, John Shelton, associate director of the USGS South Carolina Water Science Center, said Monday. The previous high was 10.89 feet on June 29, 2007.

The creek, which often flash floods during heavy rain, is normally less than 1 foot at the site on the southern edge of the University of South Carolina's campus.

Areas including Assembly Street south of Blossom Street and parts of Five Points were also flooded by Sunday's storm. There was still water in parts of the basement Monday at The Lofts at USC, a student apartment complex at Whaley and Main.

"We usually get some water in the basement whenever it rains hard and water is in the road," said assistant property manager Ashley Haynes.

Five people live in the basement, and Haynes said carpet cleaners were called to take care of any water that ended up their apartments. She did not have a damage estimate.

"The residents get frustrated but there's not much we can do," Haynes said.

Rocky Branch, which flows through Five Points and USC's campus, can be overwhelmed by heavy rain because much of it is hemmed in by development , and in some places it runs underground or through culverts.

Once the creek reaches 6 1/2 feet on the USGS gauge, warnings go out to federal and city officials alerting them of possible flooding.

With more storms possible this week, Shelton said there is a chance of more flooding.