Lander president can spend $40,000 yearly while house being repaired 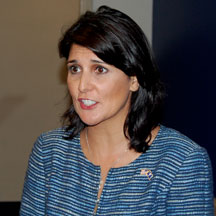 Gov. Nikki Haley says that the Transportation Department would be easier to manage without a board to deal with.

Lander University's president will get to spend up to $40,000 a year to rent another house while his 6,000-square-foot, on-campus house is being renovated.

But Comptroller General Richard Eckstrom opposed Tuesday's decision by the State Budget and Control Board, questioning the need during hard economic times.

"Does it seem like now is the time to make a real generous housing allowance? We have an 11.1 percent unemployment rate in the state," Eckstrom said.

The board, however, voted 4-1 to let Lander President Daniel Ball spend the money. Lander officials told the budget board that Ball won't be able to live in the 10-room house on the Greenwood campus during the $300,000 renovation.

Supports in the almost 70-year-old house are deteriorating, they said. The house, which also contains some university offices, was last renovated in the 1980s.

The university officials said they were unsure how long the latest work would take.

Unlike recent budget board meetings, Gov. Nikki Haley and state Treasurer Curtis Loftis, both board members, did not clash about financial problems at the state Transportation Department.

The department recently had to get the federal government to advance it $52 million so it could pay its bills. Transportation Secretary Robert St. Onge also has said the department failed to make an $8 million payments to the State Infrastructure Bank, which he called an oversight.

The Transportation Department, which is governed by a seven-member commission, is out of Haley's direct control. After Tuesdays' meeting, the Republican governor said the department would be easier to manage if it did not have a commission.

"The most effective I can be with my agencies are the ones that I can sit down with the directors and say, 'OK, game plan, how are we doing this,' " she said.

Abolishing the governing board would require the state Legislature's approval.

The Budget and Control board put off any discussion on DOT's continued problems so it can get more information before its next meeting, Nov. 3.