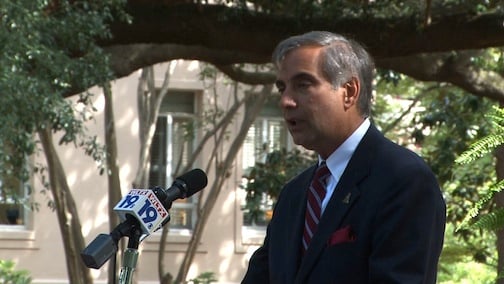 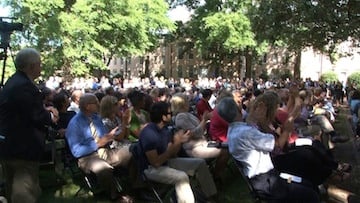 An eager crowd listens to President Pastides talk about the future of USC.

President Pastides said he believes that participation, innovation and leadership are the main ingredients that will help USC become a key contributor in our society.

Students, faculty and staff gathered at the Horseshoe Wednesday afternoon to hear Pastides give his annual State of the University address.

Derrick Huggins, the University's Associate Vice President, said he was moved by the president's words.

"What the president is saying is that he is looking for all staff members to step up, whether it may be in their niche or out of their niche, but to participate in their community, and I was really pleased with that," Huggins said.

The ceremony, which lasted about an hour, has had trouble generating a crowd in years past. Refreshments, meet and greets and photo ops were available, which university officials hoped would lure in students.

Some students thought the money spent on refreshments, sound equipment and rental chairs could have been used for something else.

"I have came to the conclusion that the university is going to spend their money how they want to spend it, regardless of whatever protest or anything we say," Cassandra Zamora, a USC student, said. She added, "It probably could have gone to something more efficient than speeches and refreshments."

Several people at the speech said they were excited about the direction in which Pastides plans to lead the University.