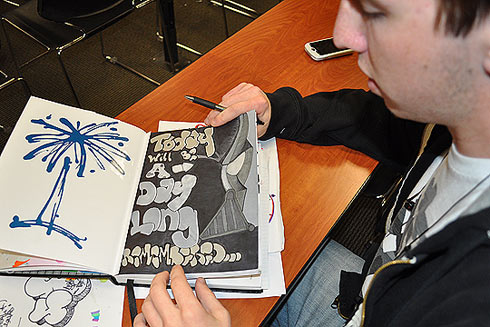 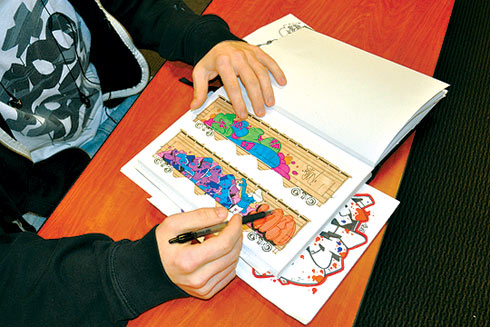 Ryan Bowen shows off some of his potential graffiti he has drawn in his sketch book. “I’m always drawing in this. It has all of my ideas.”

A crisp, pastel polo shirt and khaki shorts that fall above the knees don't shout "graffiti artist," but those are Ryan Bowen's "colors" when he tags, or paints graffiti, to sell out of his garage. That makes "Rybo," as he signs his work, a polarizing person in the graffiti community, which considers it sacrilege to tag canvas to sell, instead of walls to mark urban territory.

"I kind of get a mixed reaction because I'm in between. Like, I love graffiti and I love to see graffiti on the street," Bowen said. "Graffiti artists think I'm too legal and commercialized, and fine art people think it's too street."

In March, Bowen's work was exhibited at the Columbia Regional Visitors Center as its artist of the month. His signature design is of graffiti-style palmetto trees, created with quick, loose drips of bright paint.

"Ryan contacted us about maybe showcasing his work, and when we all saw it, we were blown away," Visitors Center manager Jill Asouzu said.

In fact, the center's marketing team wants to make shirts and mugs with his iconic design.

"His work was really funky, very fresh and new," Asouzu said. "He was by far one of our more popular featured artists."

While Bowen knows some people may see it as "selling out," others, like local street artist Cedric Umoja, aren't so quick to condemn. Umoja has also taken graffiti painting off the streets to make a living, and he thinks Bowen's fusion of styles is just the natural progression of art.

"The work I do is a hybrid of street art and fine art," Umoja said. "Mixing styles is really not as big a deal as some graffiti artists think."

Bowen, 20, has been creating graffiti since he attended Covenant Classical Christian School in Columbia, but only recently started marketing his work.

He grew up interested in drawing but only started practicing graffiti five years ago after he read a biography of Dondi White, one of the most influential American graffiti artists.

"I read that, and I became obsessed. I would practice my graffiti. It quickly became my passion," Bowen said. "Graffiti is a really expressive art form, and I haven't really seen it done on canvas."

Now, as a junior at the University of South Carolina, Bowen studies computer information systems but says it's hard finding work in Columbia.

"I think Columbia wants to have the feel that they're more artist friendly and more modern, that's somewhat of the direction they're going in. But graffiti stuff is tough to do around here legally," he said.

Graffiti is widely associated with gangs. In 2007, then-Gov. Mark Sanford signed the Criminal Gang Prevention Act, which, among other things, cracked down on graffiti vandalism.

"The police are very hard on business owners who have graffiti on the outside of their buildings, and I think that might be one reason people are hesitant to allow someone to come paint a mural," Bowen said. "Blue Sky did his murals 20, 30 years ago and it was controversial. Now, they're one of the talking points of the city."

These rules led Bowen to the palmetto canvas. He says he was hesitant to paint the state symbol because many artists have done it before.

"To be a local artist, you have to do a palmetto tree, almost," Bowen said.

But about two years ago, he says, he was lying in his room, struggling to find something to put on the canvas he had just bought.

"My dad walked by and suggested I just paint the palmetto tree in my own style. I thought about it for maybe a couple of minutes and wasn't too thrilled about the idea."

But with no other ideas, Bowen just painted the tree, stepped back and liked what he saw.

Bowen is still learning the nuances of painting graffiti, including lettering and design, but he's learning quickly. He's sold over 50 paintings of his palmetto tree design at $20 to $50 and is working on more.

"I've bought 10 of his paintings, but I've given three as gifts," said Cliff Hardin, 34, of Columbia.

"His work represents a fusion of two very different cultures," Hardin said. "On one hand you have the symbol, which represents our state and traditions. On the other hand, it has its own free-flowing and almost rebellious style of expression."

Graffiti or not, the public's response to Bowen's showing at the visitor center indicates that his art and merchandise will keep selling. After a month, all but two of the 150 business cards he left there had been taken.