Columbia Opportunity Resource works to keep graduates in the city 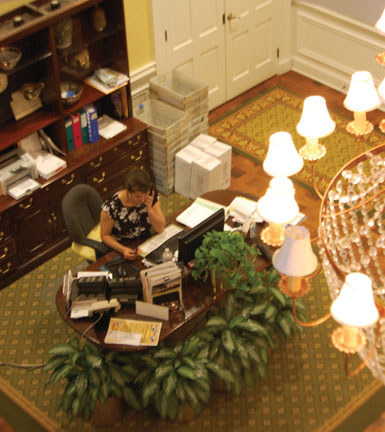 Columbia is having trouble retaining its young people as students graduate from college and head elsewhere. As executive director of Columbia Opportunity Resource, Katherine Swartz is here to do something about it.

COR's mission statement says it's an organization focused on making "our region a better place to live, learn, work and play."

"COR doesn't exist to create its own programs," Swartz said. "We basically try to become one comprehensive resource so that people can become plugged in to the community."

Swartz says about two of every five college graduates leave Columbia within five years of getting their diplomas. A bit more than a third of those in a recent Columbia Talent Magnet Survey cited a lack of high-paying, high-skill jobs.

Columbia is hardly alone. The problem of keeping local talent at home is a problem in many cities, like Detroit, where leaders are tackling the problem with aggressive programs like the Michigan Cool Cities Initiative.

The Carolina Reporter sat down with Swartz in the lobby of COR's offices in the Columbia Chamber of Commerce to talk about her work. Parts of this interview have been edited for brevity.

Forty percent of people are leaving the city within three to five years of college graduation. What do you think it is that's drawing people out of Columbia?

I think that Columbia doesn't do a great job of promoting all of the unique attributes that make Columbia great. Whether it's the riverfront. Whether that's the thriving underground arts community or the tight network of entrepreneurs that are helping to build themselves up. The 7,000 nonprofits that are in our state. … All those things aren't promoted well enough and young people don't know about them, and they're not cataloged well. Because it is not easy to find information or opportunities, they see other cities as having more resources, or they have friends that are there that are having a great time and having this great life. So they choose to leave the community. … Survey after survey ranked quality of life first, so they choose the city first … and then they find a job and make a life for themselves. … In this economy, there really is no city that is doing well in terms of attracting and retaining talent. There are some cities that are definitely doing better, but the economy makes it that much more difficult for a city like Columbia that already suffered from a high attrition rate. But now we have the recession to add to that.

Atlanta and Charlotte are two cities people want to move to the most from here. How is COR trying to make Columbia be more like those cities?

I feel like what Columbia has to offer that's different than Atlanta or Charlotte is smaller community in that it is easier to get involved, in my opinion, in a smaller community than it is in an Atlanta or Charlotte. I think the friendliness factor here in Columbia is a lot greater than in Atlanta. In Atlanta, you avoid looking at people on the street whereas in Columbia you pretty much say hello to everyone that you pass. ... It depends on the person more than anything else. …

Thirty-seven percent of people said that Columbia does not attract enough big corporations. Why do you think these corporations aren't coming here, and is there anything being done about it?

Well, if you ask any of the economic development experts in Columbia or any other community, they'll tell you that true ratio should be that 60 to even 80 percent of the growth in jobs should actually come from existing businesses. So we could spend endless amounts of time trying to recruit the gorillas to come to Columbia or to come to South Carolina even, but at the same time we should be parallel in our efforts in fostering current businesses, fostering an entrepreneurial friendly environment here in Columbia. So I think there maybe is some education that needs to be done by the authorities in economic development. …

In that survey, there's a lot of complaints about the homeless population. Is that really something influencing people to maybe leave the city?

I don't think it's a major decision factor. I think what is a major decision factor is the prolonged effort it's taken. We still haven't solved the problem of lack of intergovernmental and interagency cooperation. ... The homelessness issue is something that would be addressed through better cooperation. ... Yes, homelessness is one of the stigmas that suffers, but one of the issues why people choose to leave Columbia is because they see people don't cooperate and don't get along.

How are the events that you organize designed to keep people in the city? What types of jobs are created from these events?

There are not necessarily jobs created per se, but it gives people opportunity to build their networks, which ultimately leads to them hearing about a job. I think oftentimes people get referred to jobs based on people they know versus just finding it on the Internet or wherever else it is they hear about a job, So, it's more about maximizing your network to best that you can, and that doesn't mean spending more time on Facebook. That means getting out, meeting people and building relationships face-to-face. That's what COR offers.

What event that you organized do you think had the most impact and in what way did it help the community?

I think it was one of two things. Our most recent event was our kickoff for 2011. That was in February. We launched a campaign called "Give 11 in 2011." ... When we had that kickoff event, it was about 250 people, which is a reasonably sized crowd, but the energy that was in that room, people just getting excited about the cause and they heard some good speakers to get them inspired and do great things. If we could put that energy into a bottle, we could change the community.