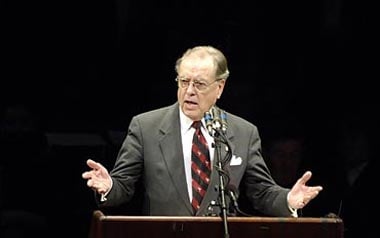 By: Michael Wunderlich and Rebecca Farmer

Former USC President Andrew Sorensen died suddenly Sunday at the age of 72. He died sitting at the breakfast table in his home in Columbus, OH after coming back from a morning bike ride. No cause of death has been given.

Sorensen would also often lend a hand to help students as they moved in at the beginning of the school year.

"All of us at Carolina are deeply saddened by the loss of Andrew Sorensen." Pastides said. "As a nationally respected leader in American higher education, Andrew left his mark across our nation, and his contributions to our university were many and important.

"He will be remembered as the father of Innovista, as a bridge builder to the African American community and to the University Hill neighborhood, where he and Donna lived for two years while the President's House on the Horseshoe was undergoing much needed renovation.

Sorensen is also remembered for his efforts to improve USC in energy technology, "green" building initiatives, and working on improving relations with the African-American community during his six year tenure.

Sorensen was also an ordained minister and the author of six books ranging on topics from alcoholism in the priesthood to the role of university presidents.

Sorensen retired from the USC presidency to become distinguished professor emeritus in the USC School of Medicine where he worked with Greenville hospitals on developing a relationship with USC's medical school.  Last fall he became the chief fundraiser at Ohio State University.

He leaves behind his wife, Donna, two children and one grandchild.