Mono peaks in summer and could stay till winter - Columbia, SC - DatelineCarolina 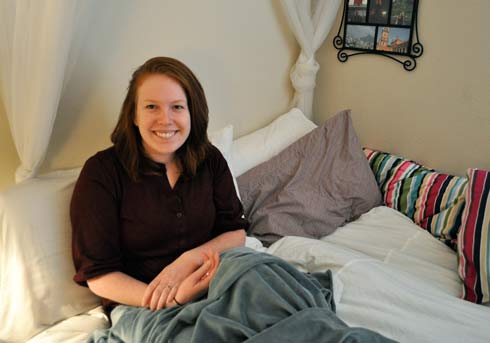 For college-age students, mononucleosis peaks in summer and could stay till winter

By Tas Anjarwalla
Edited by Amy Smith and Paul Bowers

University of South Carolina senior Lexi Bourn had attributed a semester's worth of exhaustion and lack of enthusiasm to her strenuous academic schedule. Instead, six months after a knot appeared on her neck, Bourn learned that all along she had mononucleosis and could have unknowingly been spreading it.

"I was really, really tired all the time because of student teaching," said Bourn, 21, who had been a second-grade teacher's assistant last fall. "But everyone said that was normal – other teachers, professors and my friends all said I would feel that way. I couldn't get over how tired I was, but I didn't think I had mono."

With summer on the way, parents of homebound college students might want to take special note of mononucleosis symptoms, which can also point to strep throat – exhaustion, sore throat and swollen glands.

The summer is peak mono season, primarily for those 18-23, according to a 2003 study by the National Center for Biotechnology Information. The virus can last a long time, in some cases over a year, and is often misdiagnosed.

Bourn, for instance, was sick from last June to December and misdiagnosed multiple times.

"For people of college age, since mono is spread from the passing of saliva, anything that is increasing that activity can put them at risk," said Dr. Melissa Overman, a regional medical director for the S.C. Department of Health and Environmental Control.

"If nothing else, we're so used to thinking of it when everybody goes back to school. They forget about it when summer rolls around," she said.

Being exposed could be as simple as going to a ball game with friends and sharing a drink, having a summer romance or sharing utensils during recreational activities like camping, she said.

Mononucleosis can easily go undetected, chiefly because fatigue is often attributed to factors other than the viral disease, especially in students, said Nicole Carrico, a spokeswoman for USC's Thomson Student Health Center.

"Students are always tired. They don't sleep enough. It's very easy to walk around for two or three months and have it, even knowing you are tired," she said.

Without a proper diagnosis, students like Bourn can contract mono in the summer and carry symptoms well into winter.

Bourn remembers one October morning distinctly; she couldn't even finish putting on makeup. "I told myself I'd put on my foundation and get back in bed, then get up and put on mascara after resting for a bit," she said.

By then she'd had mononucleosis for five months without knowing. Bourn had seen a doctor about the knot on her neck two months earlier but was told it wasn't a major concern.

After that October morning, Bourn started losing her voice and had a sore throat and fever, so she went to the doctor again.

Her symptoms fit the bill for mononucleosis – sore throat, fever and swollen glands – but DHEC's Overman said these are also indications of sicknesses as minor as strep throat or a cold. Without a blood test, misdiagnoses aren't unheard of, she said.

Bourn's doctor treated her for a sinus infection.

By December Bourn was still feeling tired. She went to the doctor a third time, but just for a standard checkup.

A few days later, Bourn got a call saying she was in the recovery stages of mononucleosis.

"There wasn't anything I could do at that point," Bourn said. "There's no medication for mono."

Her boyfriend, Wes Lambert, had it too.

"If I hadn't found out that Lexi had it, I probably never would have gone to the doctor," Lambert said.

Even into late January, Bourn said, she tired easily.

In a 2010 issue of the New England Journal of Medicine, 35 percent of British female college students and 5 percent of males with mononucleosis had fatigue lasting up to six months.

Patrick Dafferner, a 22-year-old University of Tennessee senior, was fatigued for almost a year after getting mono.

Dafferner began feeling uncharacteristically tired in July 2009, but didn't think he had the disease because he'd had it once before. As the year went on with multiple tests and misdiagnoses, his doctors began to think he was depressed. Dafferner was diagnosed with mononucleosis around Thanksgiving, and his symptoms lasted until the next June. They still re-emerge occasionally.

The virus stays in your body, dormant, for the rest of your life, said Carrico of the USC health center. Triggers like stress can set it off without warning, she said.

"Stress from finals is classic for having outbreaks of mono," Overman said. "The best thing to do is try and pay attention to your nutrition, how much rest you're getting, and don't spend all your nights up real late."

Carrico recommends that those feeling fatigue or who have a sore throat or swollen glands get looked at, because if unchecked, the kissing disease can last much longer than a summer fling.