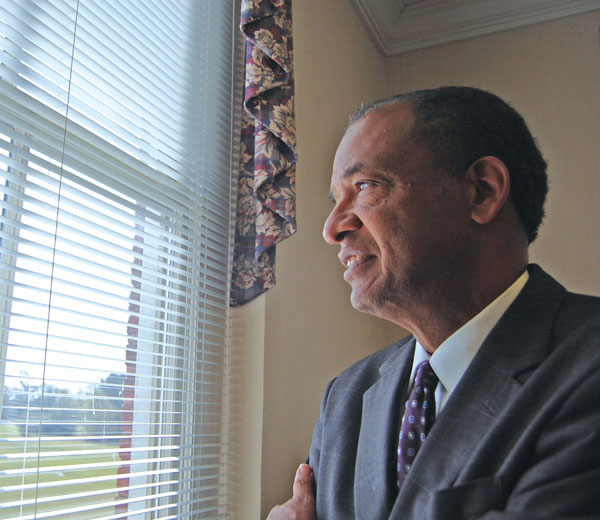 Civil rights activist, and now president of Voorhees College, Cleveland Sellers effortlessly conveys a sense of strength. He stands well over 6 feet, and in a room his presence is commanding. But as soon as Sellers speaks, it is his humility and passion that stand out.

Sellers' name has become synonymous with being a scapegoat for the Orangeburg Massacre of 1968. As head of the local chapter of the Student Nonviolent Coordinating Committee, he was the only person charged with inciting to riot after state troopers fired on a civil rights demonstration at South Carolina State University, killing three students and injuring more than two-dozen other people.

Gov. Robert McNair called it an "unfortunate incident," and all nine police officers involved were later acquitted. Sellers was convicted, but pardoned in 1993. His ongoing legacy, however, reflects his devotion to tomorrow's leaders.

In becoming the head of the historically black college in his hometown of Denmark, Sellers has refused to merely sit behind a desk. Instead, he seeks to bridge a disconnect he says has been created between his generation and today's youth.

"Somewhere down the road, after maybe about 10 years of ‘freedom,' we took our hands off the plow and allowed ourselves to skid into the ditch, with losing probably a generation-and-a-half of young African-American males to prison, dope and death," Sellers says. "We have to own up to that … and get control, and direct our young people in the direction they need to go."

Bobby Donaldson, an associate professor of history and African-American studies at USC, a program Sellers led for seven years, says Sellers probably knows every student on Voorhees' campus and the students' families.

"That was one of his great gifts, being that teacher who is charismatic, passionate and very concerned about the well-being of students, both in his classroom and in general," Donaldson says.

Sellers discussed his experiences with The Carolina Reporter. Parts of the interview have been edited for brevity.

Your roots are in Denmark, so some say that becoming president of Voorhees College allowed your life to come full circle. Would you agree with that?

I think there's a lot of validity to that. I started out here, matter of fact, born and reared in Denmark. I had an opportunity to go to high school at Voorhees and became an Episcopalian at a very young age. Those were the three major, I think, attributes I brought to the table.

Forty-three years later, have you managed to achieve any sense of closure?

What do you think is preventing that from prevailing?

I think that the state has dug in its heels and said that we are not – and that was certainly the position of Gov. McNair – we're not going to say anything, we're not going to do anything, we're just going to put our heads in the sand and eventually the Orangeburg thing will blow by. I don't believe that, and I think Dr. King once said the truth crushed to the ground shall rise. And I think that more and more people are beginning to find out and do investigations and reveal Orangeburg. And they want to know why hasn't the state, by now, decided to do something about it? And so we still keep working on trying to get the state to address those issues.

What do you predict is in store for your son, Rep. Bakari Sellers', political future?

I don't know, and I'm not sure Bakari knows what the handwriting on the wall is. But he wants to do something in the state of South Carolina that will make a difference. He sees the political process as one of the ways in which you actually change the state to make it a better place for all citizens who live here, and to get it [out of] stuck in 1861. … Maybe he'll run for statewide office at some point. Maybe he won't. Maybe he'll run for a congressional seat, or maybe he'll run for a Senate seat. I'm not sure what is in favor, but he works very hard at what he does. I know that, and most people around the state know that. … He has been where he needed to be; he has spoken up when nobody else would speak up and everybody else was quiet.

What do you hope your lasting legacy will be?

I hope that people will see the commitment, the courage and the dedication. I hope they will see my true commitment to the mission of icons of black history, the educators and the leaders of that time. To the whole idea of the importance of faith and service and education. Those were the things, the kind of iconic things, that we try to impact and make a difference in, in our communities. I hope people see the value of community and why it's important that we continue to build communities and that becomes a priority. That we can't escape who we are. We have to learn to live within ourselves and our own history and whatever cultural principles or iconic figures or folklore or history that we have and that we bring and we continue to understand who we are as a people. That doesn't change the melting pot. What that simply means is that it enriches us to have that kind of stamina and determination that we can stand up with that kind of pride and dignity and know that there were people who didn't have very much, but were willing to risk it all, including their lives, to make America what it should and could be. That's the legacy, if there is any legacy. And those areas of education, faith and service are very important in young people … that's the driving force, that's the motivator for me.