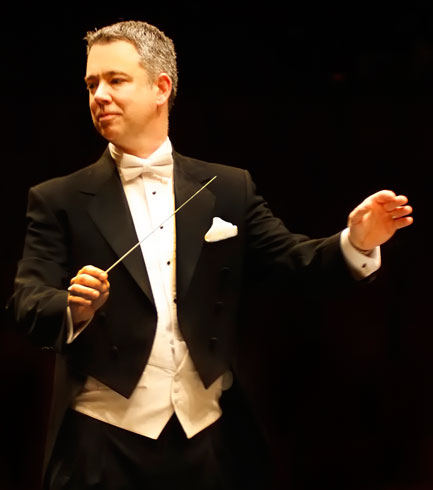 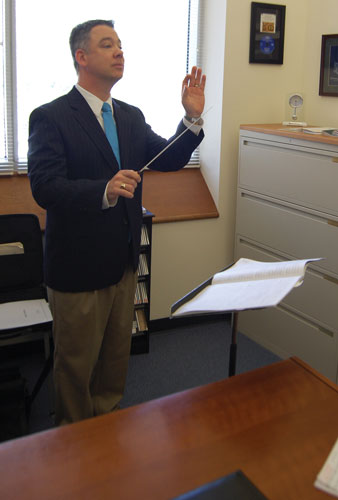 Walk down Duncan Street in Columbia's Rosewood neighborhood at 5 a.m., and you might hear faint strains of Bach or Vivaldi coming from one house.

Inside, Scott Weiss, USC's new director of bands, has been awake since before sunrise practicing the intricacies of conducting different music to keep his skill up to the standard he has set for himself and his students.

"For me, the challenge is to grow in the understanding of music," Weiss said. "In every piece I do, I learn something."

Weiss says conducting is just as difficult as, maybe even harder than, playing an instrument. That's why he practices pieces for up to two concerts in advance.

It's this type of dedication that has helped Weiss reach the pinnacle of music education.

In his seven months as the band director, Weiss' biggest change has implementing a blind audition process that lets students try out anonymously for ensembles.

His personal connections in China have also gotten the USC concert band a gig in that nation's biggest concert house during a tour next year.

By taking his students to China, he will promote music and try to foster growth in an area dominated by non-wind instruments like strings and piano.

"The Chinese are very interested in our wind ensembles," Weiss said. "Those things really haven't existed over there."

Rebecca Philips, director of athletic bands, says a USC ensemble has not gone on an international tour in decades.

Like many youngsters who take up music, Weiss started in sixth grade. He chose to play the trumpet and says he fell love with it immediately.

After getting his undergraduate degree for trumpet at Indiana University, Weiss realized he wanted to conduct. He eventually built two high school programs at the Potomac School in McLean, Va., and Harrison High School in Kennesaw, Ga.

His move to college bands was natural. After short stints at Lamar University and Indiana, he became the lead band director the University of Kansas, taking over for Robert Foster.

When James Copenhaver, USC's director of bands, retired after 34 years, music school staff thought it would be difficult to replace the man who built USC's program.

But Weiss was used to replacing legends. After all, at Kansas he had taken over for Foster who, as he put it, "was the Kansas band."

Philips, with the music school since 2007, says Weiss has brought an energy level and excitement unlike any she has seen here before.

"Students are thrilled with him and what he has done with the program," Phillips said. "He has been wonderful."

Weiss now has full control over the music program at USC and has started making an impact on students. His biggest change so far has been implementing blind auditions.

"The blind auditions really removed the stigma of nepotism and favoritism within auditions," said Frank Avery, a fourth-year political science student who plays tuba in the wind ensemble.

Weiss says doing this will produce the best ensembles able to perform at the highest level.

"I want this to be one of the elite band programs in the country," Weiss said. "I want our ensembles to be considered nationally and internationally as among the very finest wind bands in the world."