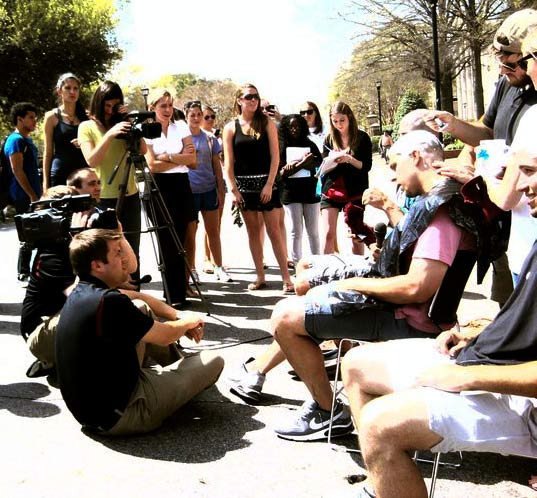 When children with cancer are playing and laughing at Camp Kemo this summer, it will be at least partly because some USC students took a class project and turned it into a mission.

The students have already raised more than $35,000 and want to reach $60,000 with this Thursday night's "Sip, Shout and Shag for Camp Kemo," their latest effort to reach that goal.

Each semester, students in adjunct instructor Annette Hoover's class on tourism, festival planning and management pick a philanthropy for which to raise money. Such "experiential learning" has become popular in recent years as a way to give students a real-life dimension to their classes.

Hoover said it's good to give students hands on experience with how the real world of event planning works.

One of Hoover's students, Courtney Shumpert, said she and her classmates chose Camp Kemo because they thought they could do the most for the children.

"There's no guarantee that they're going to be here next year," Shumpert said.

Camp Kemo, near Batesburg-Leesville, is free for approximately 100 children who spend a week there each summer. But it costs Palmetto Health, which runs the camp, more than $500 per child, and it relies entirely on community donations to cover the cost.

The camp's director, Jeanne Schmidt, said she tries to stop by the class once a week to "give a face to the camp" so the students will realize their impact.

"They've put their heart and soul into it," Schmidt said.

They're also getting help from a journalism school public relations class that decided to team up with Hoover's students to help with media relations and campaign planning.

Hoover, who has taught the hotel, restaurant and tourism management class since 2005, has no doubt her students can reach their $60,000 goal.

"They have really gone over and beyond" in reaching out to the community, she said.

Courtney Stafford, the class's general manager of finances, is organizing the silent auction that will be one of the attractions at Sip, Shout and Shag and says she's still receiving donations.

The event at the S.C. National Guard Armory on Bluff Road costs $25, $15 for students and members of the military, and will also have food and entertainment. The students raised the initial $35,000 by selling tickets to the event and getting restaurants to hold special nights where a portion of profits went to Camp Kemo.

The students also raised money on Green Street when members of USC's baseball team shaved their heads in a symbol of solidarity with the children, many of whom lose their hair to chemotherapy.

"It's just going to be wonderful to see the smiles on the children's faces this summer," she said.