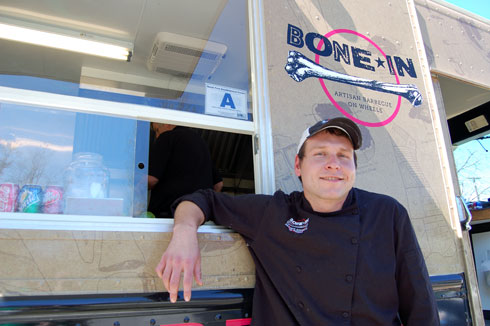 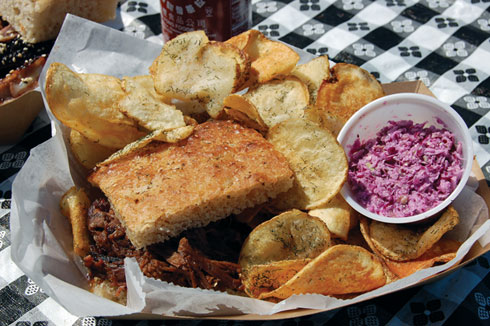 Bone-In chef Scott Hall writes all of his own recipes, like the one for this pepper-vinegar pulled pork on focaccia with coleslaw and potato chips. “One of the best times to come up with ideas is when I’m partying,” said Hall.

Those lined up outside Scott Hall's Bone-In Artisan Barbecue on Wheels may spot the chef in his truck slicing focaccia or seasoning chips. Not everyone has been drawn by the smell of steaming barbecue. Some came because Hall has used social media to help sell his blend of high-design and homegrown love for Southern cooking.

Hall, 33, has been following food street culture for the past eight years. "It's this marriage of really interesting food that's made all minute, right there, really cool graphic design," Hall says. And the social networking "makes people feel like they're in on this kind of secret thing."

Food trucks have long been a staple in large markets, though not so much in places like Columbia. On the West Coast, their standard-issue sandwiches have been left behind for more gourmet-style cooking.

But Hall says there's not a lot of that going on here. "It's very shrimp and grits, very traditional - stuff out of freezer boxes."

While studying theater in New York, Hall worked in restaurants for 10 years, growing his passion. He was enthralled by the combination of ingredients to make food that challenged expectations of ordinary meals. Hall opened a company called Flavor Catering and Event Design, and fell in love with the business.

After becoming "burnt-out" with the big city in 2009, Hall moved back to his hometown of Lexington where his family ran the Corley Mill House and Garden.

The restaurant business is grueling, demanding and sometimes cutthroat – and that's just if your kitchen is anchored to a building and diners know where to find you.

"Restaurants are really hard. It's like going to war," Hall said. "Whereas catering is hard too, but its much more creative. It's like opening up a new restaurant every day."

When you're on wheels, you need an advanced advertising strategy. Hall thinks he's found his with an online video series to be hosted on YouTube or Vimeo that let's you watch that week's delicacy from the farm or the wholesaler through the kitchen and onto the plate.

He hopes you not only bond with your food, but also with his business, which can found on Facebook, Twitter, and, soon, Yelp.

"Scott does most of the food, but we all get together and pull pork and smoke it," sister Stephanie Hall said. "He gets really excited about upscale food, not having anything ordinary. He likes to make everything top-notch."

Hall's hopes customers will see a video of a food item "and then tomorrow they go and have it for lunch."

"The truck is always this living entity, instead of the stagnant, ‘We have a barbecue sandwich. We have a fried pie," he says. "They feel this personal connection with this food and its maker, which they already feel close to because it's a local product."

"I appreciate what Scott is doing through his use of local products in the dishes," said Emile deFelice, who organizes the All-Local Farmer's Market and owns Caw Caw Creek Farm. "I think the farmers market is bringing a lot of business to Bone-In."

Bone-In sold out its first day during the market at 701 Whaley St. and has on several more occasions.

"We did underestimate how much support we were going to get the first time we went out," Hall said. "We were sold out by noon. I had no idea people wanted to eat brisket at 8:30 in the morning."

"I've really been wanting to try their food since they started tweeting late last year. I try to keep up with the new businesses that come to this area," Nevill said. "There's only one restaurant on this street, and you won't find any deep-fried hot dogs with brisket chili."

It's that kind of creative dish that has people coming back for more.

"I've been back several times already," USC anthropology professor Ken Kelly said. "This a rare thing for the city, and we need more of it."

Hall steps out of his kitchen to get feedback as the lunch rush dies down. "It's the worst thing when someone complains about your food," he says. He's found mostly good reviews like Kelly's, receiving only one bad rating about pricing so far.

Hall says the Food Network, where fellow South Carolinian Tyler Florence recently hosted a series on food trucks, may be the cause of all the hype. "It's changed how people look at food," he says. "They're all buying sriracha and sesame oil."