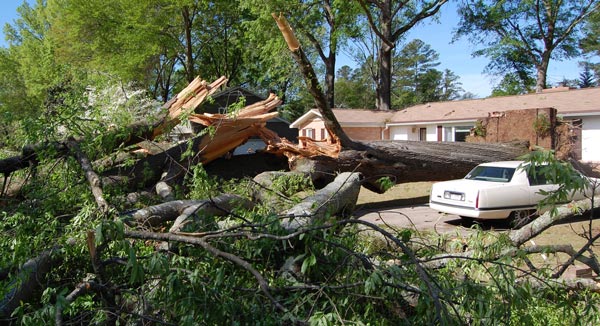 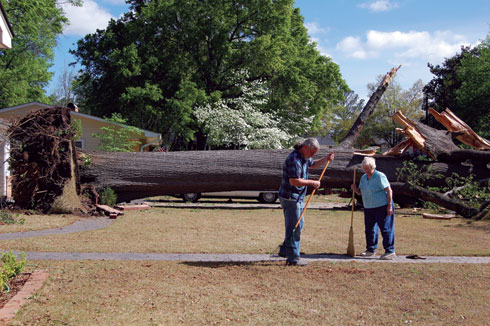 Geraldine Brown sweep leaves with her son-in-law on Tuesday after the morning storm knocked down a large tree in the yard.

Over 60,000 Midlands residents were without power Tuesday after an overnight storm knocked down power lines and trees.

By Tuesday afternoon SCE&G had reduced that to about 9,700 outages while MCEC was left with 200.

Hurricane-force winds were measured at 75 mph at the Columbia Metropolitan Airport, said Al Moore, a National Weather Service technician in the Columbia office.

Geraldine Brown, 78, heard a crash about 3 a.m. at her home on Christopher Street in southeast Columbia.

"I thought a limb had hit the roof," Brown said.

But past her front door was the torn-up trunk of a massive oak tree, around 4 feet in diameter. Brown's husband, Ruben, estimated it is 300 years old.

"We've never seen anything like this, even through Katrina and Hugo," Ruben Brown said. The couple has lived in the Old Woodlands area for almost 50 years.

The jolt also caused cracks in the walls and a hole in the kitchen ceiling, the couple said. A branch bent their car's hood and cracked its windshield, and it crushed a fishing boat in a neighbor's yard across the street.

City crews were helping with the cleanup.

A woman was cut and bruised, but no one was severely hurt, Police Chief Randy Scott said.

The Red Cross set up an office at 6102 North Main St. to help those unable to stay in the area because their homes were not structurally sound.