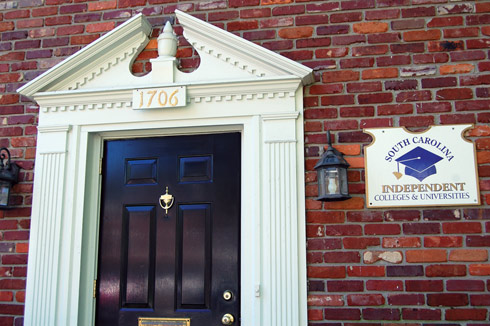 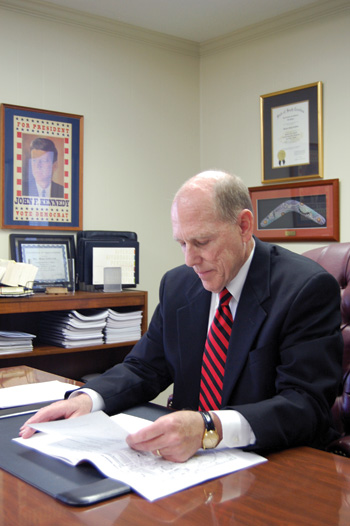 Mike LeFever, President of South Carolina Independent Colleges and Universities, goes over documents in preparation for the celebration.

While South Carolina's state colleges and universities tussle with the Legislature and governor over shrinking funds, the state's independent universities plan to thank legislators this week for keeping scholarship aid to their institutions intact.

Representatives from the group's 20 schools will be at the State House Wednesday to honor three representatives who were crucial in protecting scholarship aid to independent schools at a time when South Carolina faces an estimated $663 million budget deficit.

Gov. Nikki Haley has designated this as Independent College and University Week. Her deputy chief of staff, Ted Pitts, will lead the rally at noon Wednesday on Capitol the steps.

"Because student financial aid is a significant feature that allows many students to pursue the college of their choice, we use that day to thank the Assembly for supporting financial aid even through tough budget times," said LeFever, president of the South Carolina Independent Colleges and Universities.

The state's independent colleges and universities employ around 6,500 staff and faculty, spending about $650 million annually, according to the SCICU.

"By using Life and Palmetto Fellows, we are able to retain some of the best and brightest students who would otherwise be going out of state," said Courson, R-Richland.

South Carolina's independent colleges and universities represent about 14 percent of the state's undergraduates but 24 percent of the bachelor's degrees awarded. At least 34,000 students attend member schools.

A dinner Tuesday will recognize recipients of an "Excellence in Teaching" award that includes a $3,000 professional development grant.

Greg Day, associate professor of music at Southern Wesleyan University, said he will use part of the money for equipment or additional resources.

"The president told me to use it however I wanted, but my colleagues have been pressuring me to share," said Day.

"We've taken pay cuts in the course of the year, but we're maintaining our jobs and providing quality education," Day said. "Any support we can get is appreciated and needed."