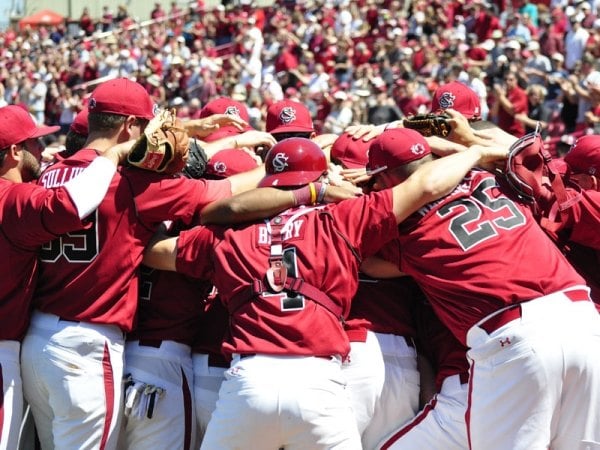 No. 3 USC Sweeps Kentucky this Weekend

The South Carolina baseball team used stellar pitching and timely hitting to sweep the Kentucky Wildcats in a weekend series at Carolina Stadium.

Michael Roth pitched eight strong innings allowing only one run and surrendering three hits in Friday night's 3-1 victory.  Roth is 6-1 on the year with a 1.44 ERA and has 50 strikeouts.

Shortstop Peter Mooney hit his first home run as a Gamecock on Friday.

One of the heroes in last year's championship run in Omaha did it again on Saturday. Sixth-year senior Brady Thomas drove in Adrian Morales to win a thrilling game 4-3 in 10 innings. Morales tied a school record with three doubles. Matt Price worked two scoreless innings and got his third win of the season.

Freshmen Forrest Koumas had a strong outing on Sunday working a career-high 6.1 scoreless innings. Koumas allowed two hits while striking out three UK batters. The freshman is now 3-0 for the season with a 2.10 ERA.

Peter Mooney tied his season high with three hits in Sunday's victory as the Gamecocks turned back the Wildcats 4-1. John Taylor was big out of the bullpen on Sunday allowing one run and three hits in 2.1 innings while striking out four Wildcat batters.

The Gamecocks improved to 22-5 on the season and 7-2 in the SEC. South Carolina will play USC Upstate on Tuesday before traveling to Tennessee to play the Vols this weekend.