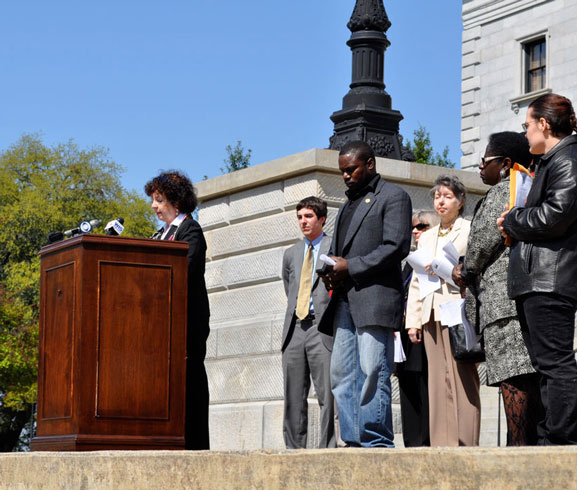 A Republican proposal to require a picture ID to vote won't work because the supposedly free IDs the state would give to those without drivers licenses aren't free at all, the League of Women Voters said at a State House protest Tuesday.

The proposal, which has passed the Senate and is in the House, should be scrapped and the estimated $1.3 million to be spent in the first year on the IDs should instead be used to improve voting machines that can frustrate certain people, said Carole Cato, the League's advocacy director.

"We need to count every vote and keep every voter," Cato said.

Republicans and their supporters say the tougher ID measures will insure the integrity of voting. Democrats and other opponents say they will discourage voting by people who are poor or otherwise unlikely to have a driver's license.

To help alleviate that, the bill waives the normal $5 fee to get a state picture ID other than a driver's license. But those protesting said there are many other fees that still will make it difficult for people to afford.

By the time they get the needed birth certificate, marriage or divorce certificate, Social Security card or proof of residence, the costs mount, said Dr. Brenda Williams of Sumter who helps underprivileged people get IDs. She said one person who came to her had to pay $64 to get the required materials.

Amanda Wolf of Sumter said she could not get a free ID because she was adopted and did not know her parent's names, which meant she could not get her Georgia birth certificate. But she can't get another ID from just Social Security card or proof of residence.

"It has been very difficult," Wolf said. "We tried twice now to get my certificate and we still don't know if it's going to come in."

But it's important to reduce and prevent voter fraud, said Rep. Bill Sandifer, R-Oconee, one of the bill's sponsors.

"It is imperative that we protect the ballot box and make sure those individuals that are voting are registered voters," Sandifer said

Rep. James Smith Jr., D-Richland, says voter fraud hasn't been an issue and that he and other Democrats oppose the bill partly because of the hidden costs.