At USC, they they they so excited for viral video sing-along 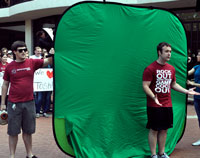 DinoBrite Productions producers Joey Thompson and Jake Causey organized the “Friday” video shoot. DinoBrite has been featured for two other clips on “Tosh.0.”

Patrick Thomas crowd surfs over the crowd singing “Friday” during DinoBrite’s video shoot. The shoot began with chants of “We want Tosh” and wrapped after one take.

A group of 80 students kicked off the weekend by energetically sang along on camera to the viral hit song "Friday" at the University of South Carolina's Russell House student union Friday.

The event by USC's DinoBrite Productions, a sketch comedy group, was an attempt to make a third appearance on Comedy Central's "Tosh.0," which presents humorous video clips sent in by viewers.

"Friday," sung by 13-year-old singer Rebecca Black, has become popular due to its humorously simplistic lyrics describing a girl's Friday routine and the sequence of days in the week. An example: "Yesterday was Thursday, Thursday / Today i-is Friday, Friday (Partyin') / We-we-we so excited / We so excited / We gonna have a ball today."

The song's video has had over 47 million views since being posted on YouTube Feb. 10. It has spawned numerous parodies and remixes.

DinoBrite hopes to win a "College Campus Invasion" competition with the video. Daniel Tosh, host of "Tosh.0," will visit the winning campus. Two of DinoBrite's videos, "Carrot Bluetooth" and "Demarcus and Chang," have already appeared on the program.

DinoBrite started the "Friday" video with the crowd chanting, "We want Tosh."

Students crowd surfed over the mob and break-danced in front of it.

DinoBrite producer Joey Thompson said the group knew it wanted to make "a video with a large crowd" when it caught wind of the competition and that parodying the "Friday" video was a perfect way to do it because the video had over 40 million views.

Although the crowd of about 80 didn't come close to the 365 RSVPs on the event's Facebook page, DinoBrite member Jake Causey was thrilled with the enthusiasm.

"It was the excitement we were looking for," he said.

USC student Rupert Hudson said he joined the video because he "loved everyone working on it" and hoped the video could help the school's publicity.

Hudson used a megaphone to yell at students on the Russell House patio, encouraging them to join the video.

Thompson said he was confident DinoBrite's two previous appearances would help the group win the competition.